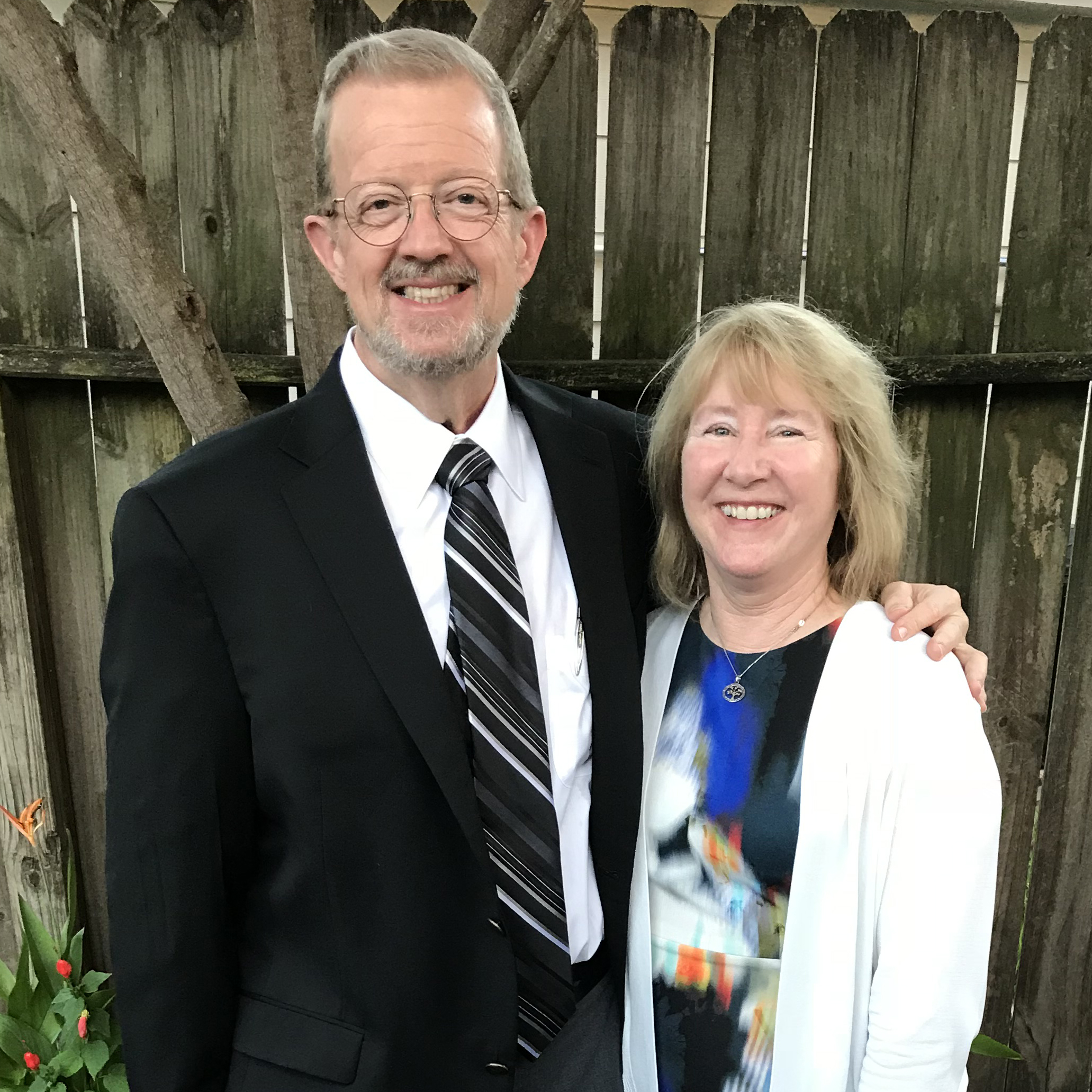 Hello Everyone and welcome to Anne & Stewart's Year In Review 2018!

In January, Anne joined 7,000 other women downtown at the Dallas Women's March. Pink-clad, carrying picket signs, they expressed their solidarity and concern about the current political climate and inequalities.

With the trees devoid of leaves and two bird feeders and a birdbath in front of the house, we love to sit on the porch and watch a variety of birds including Blue Jays, Cardinals, House Finches, Sparrows, White Winged and Mourning Doves, Carolina Chickadees, Juncos and Yellow-Rumped Warblers. We also seem to have adopted a Cooper's Hawk that comes to get a drink, sits in the tree for hours and feasts on a sparrow now and then.

In early March, on Stewart's birthday, we had the joy of attending Stewart's nephew Cliff (brother Morgan's son) and his bride Tammy's wedding in Baton Rouge, LA. After a nice rehearsal dinner at Juban's we met everyone at The Lodge at the Bluffs for the beautiful ceremony, dinner and reception. Congratulations to them both as they start their new life together! While in Baton Rouge, we hiked an Audobon Center and were delighted when a very laid back yet stunning peacock sauntered by.

In early March Stewart was on the phone for several hours trying to get tickets to see Michelle Obama at the Winspear Opera House. Score! We really enjoyed hearing her speak and answer apolitical questions about raising daughters in the White House and being challenged to a push-up contest by then 80 year old Desmond Tutu.

Anne and her sisters Trina, Teresa, and Kathy met for their yearly "Sister's Vacation" at Sanibel Island in Florida. All of them are avid birders so they hiked the beaches and the bird sanctuaries of the Ding Darling Natural Wildlife Refuge, taking literally thousands of photos and having the best time ever, wrapping up every evening up on the balcony of their rental condo overlooking the bay. They sighted some birds we rarely see such as Anhingas, Double Crested Cormorants and Burrowing Owls.

Later that month, Stewart and Anne finally visited the Trinity Audubon Center in South Dallas. While the birds were scarce this day, it's fun finding heavy forests in the midst of the big city.

For Sibling Day, April 10, Stewart gathered some photos of him and his brother, Morgan, to form this cool "then and now" photo. Hey look, there is very little difference! (...well...).

We continue to enjoy plays and musicals and had a nice contrast this year, seeing "Into The Woods" put on by our friend Maria's son Ethan's sophomore class and later as part of the Broadway series at the Winspear Opera House. It's a very strange musical no matter who puts it on and we really enjoyed both renditions.

The neighborhood women's group, Seeport Darlins, has monthly get-togethers and this year we did multiple events at Board-And-Brush, a workshop supplying paints, stains, planks, tools and stencils and we made signs celebrating holidays and births, new homes and weddings. It's so much fun we'll likely have walls covered in boards soon.

Cycling the plains and hills of Texas is still an adventure we love. April brings some of the best temperatures and scenery, including one of our annual favorite bicycle rallies, the Lancaster Country Ride south of Dallas. It's kind of magical heading out from the small town square, winding through the wildflowers, scenic vistas of fresh spring foilage, past farms of llamas, Clydesdales, miniature ponies, camels, zebras and the occassional cow.

Unusual home tours have become a great excuse to join our friends Todd and Kim in Austin. This year, the Austin Weird Tour of Homes was just the ticket, routing us through some very eclectic houses full of musical memorabilia and wild artwork, led by very mellow docents. That evening we all met up with niece Emily and did an Austin Panic Room. We were expected to defuse a bomb in the Oval Office by solving a series of puzzles before time ran out. It blowed up real good!

Bike the Bricks is an annual May cycling criterium in downtown McKinney. We lined the road to cheer on the racers with our friends Vicky, Dave, Theresa, Joanne and Jeff. It is amazing that they can block off large parts of the square around the court house in the seat of Collin County, and run bike races for six hours long into a Friday evening. Restaurants beef up their outside seating and the crowds are entertained with food, friends, good weather, whizzing bikes and the occassional crash.

Spring brings out the need to plant and Shades of Green is our favorite landscaping company, housed in an old farmhouse shaded by massive oaks and cottonwoods. This year they hosted a "Succulent Happy Hour" where we were provided wooden boxes, proper soil, succulents and decorative sands and stones to build a presumably un-killable display. We did our best but the jury is out on the prognosis.

Sister Trina, and nieces Emily and Mia came to visit in early July to help Anne celebrate a very fun extended birthday weekend. Lots of porch, puzzle and 10,000 time, good local eats and Stewart's cooking plus a score of 98 on Bop-It by Emily. This set the high point for the neighbor girls who love their Bop-It, sitting on our front porch playing for hours trying to hit "Emily's Score". (They also now know how to play 10,000 and know all of "Emily's Rules"!)

The entire month of July we glue ourselves to the TV watching each stage of the Tour de France bicycle race. This year was no exception. So exciting to watch Welshman Geraint Thomas win his first Tour victory accompanied by the British commentary, French countryside travelogue and play-by-play by Phil Liggett and Paul Sherwen. Sadly, Paul unexpectedly passed of heart failure recently and the sound of the Tour will be changed forever.

Once the tour was over we loaded up and headed to Denver for "CloudaPalooza", our Colorado Family Vacation. With Trina, Teresa, Doug & Manasi, Melanie & Brad, and Emily & Andrew, we had breathtaking views from our AirBnB "Above The Clouds". We ate, drank, hiked, traveled, played pool, shuffleboard, 10,000, and had the best time ever sitting on the suspended deck looking west to the mountains watching the hawks soaring below us.

Then we went to the 61st annual Monterey Jazz Festival. Memories of prior attendance in 2000 and 2004 made us anxious to return. In 2004 we first stayed at the Monterey Plaza Hotel and loved it. This year we were lucky to be joined by Todd & Kim. 2018 was "The Year of the Woman at Monterey Jazz Festival" with more than 50 percent of the festival program having women leaders or side players. For three days we listened to jazz, ate festival food and walked the Monterey Fairgrounds from one end to the other. In addition, while in Monterey, we hiked the coastal hike/bike path around Pacific Grove, visited the world famous Monterey Bay Aquarium, and drove to Nepenthe for lunch, at Big Sur on Highway 1, the Pacific Coast Highway.

On October 14th, niece Melanie married her beau Brad, hosting the ceremony on the lawn at their new home in Houston, including a back yard reception full of friends, family and wild and crazy nephews. Hurray for Brad and Melanie! It's amazing how the friends of this family end up staying in the area where they grew up, just a few minutes from Anne's sister, Trina. Hmmm, she must be some kind of magnet.

Halloween this year was, as usual, a total blast. Even though it rained hard that day, it cleared up late afternoon and the ghouls and goblins started showing up. We had a fun early visit from a princess, a bride, a vampire and and even Pippi Longstocking! Then came the frightening parade, including an anemone sporting a clown fish accompanied by a diver. In all, we had 156 trick-or-treaters!

November brought another "Old Farts" party with friends we've know for decades. We rotate hosting these regular get-togethers and this time it was at Doug & Mary's lake house in east Texas. We stayed at a little cabin in Deer Lake Ranch near their beautiful lake house. We had a great time at Doug & Mary's house that evening and again at the Winnsboro Art & Wine Festival the next day. The scenery was amazing, with the trees' fall colors exceptional this year. We also enjoyed a beautiful bird walk in the woods around the cabin although it was surprisingly chilly with lows near freezing. The rustic cabin tested our pioneering abilities and we gladly layered up.

For Anne's brother's birthday in mid-November, we met Glenn & Mina at the new Legacy Hall in west Plano for lunch. It was a treat with an unexpected boy-band serenade and great poke.

Melanie and Brad really didn't let up after their wedding. They went on their honeymoon to Louisville, KY. Hurray Louisville! (Stewart had atttended U of L). Then they hosted Thanksgiving with all of the Denver crowd plus Russell & Glenda, Everett & Auggie, and Brandi. We enjoyed food, drinks, jigsaw puzzles, games of 10,000, a walk to the park and playing with great nephews. Stewart convinced them they had mosquitoes on their foreheads so he could give them a palm whack which they quickly figured out and returned the favor. No mosquitoes in this house!

This year, Anne had the opportunity to join the Texas Instruments Women's Initiative to help build bicycles for the Children's Advocacy Center of Collin County. Tools in hand, we attached wheels, seats and handle bars and even threaded cables. Each bicycle was adorned with a giant bow, ready to greet the children who come to choose their free bikes before Christmas.

Our cats, Tootzak and Seebie, are doing good. They are 13 years old now and getting a little slower. They call it "Cats-heimers" when they want 100 brushes then just 20 minutes later are back to demand 100 more. They've got us trained pretty good.

In addition to Michelle Obama we got the chance to see several stars this year: Carol Burnett, Bill Murray, Neil Degrasse Tyson, Ira Glass, and Rob Lowe. We rely on our subscription to the Dallas Broadway Series and Dallas Theater Center to provide excellent evening entertainment that gets us out of the house and into downtown Dallas to see something different now and then.

Yes, suppose we are getting a little older, eh?
Anne had a bit of a scare this year, her cholesterol came back high which led to a calcium test. This test showed she had an 80% chance of an "event" soon so they scheduled a stress test, which came out fine. As part of this she visited with a dietician who helped modify her diet now to reduce cholesterol, control calorie intake, and improve nutrition. Overall a positive experience.

Stewart had problems with the veins in his right leg and has already had two operations on them a few years ago. He had two additional laser procedures this year to work on the leg, try to get the veins fixed up so that he can continue his exercise regime without worry.

Even with these minor health issues, we both continue to exercise like mad fiends. Our subscription to LA Fitness gives us cycle classes, step classes, weights, while Anne continues to workout during the day at the Texas Instruments Texins facility at her job site. We love our bike rallies around Texas with the Collin Classic, Lancaster Country Ride, and Magnolia Ride in Durant, OK and have recently discovered the massively online biking "game", Zwift, a way to bicycle in the winter in the comfort of own house, and prepare for our next spring Backroads trip.

Happy holidays to all !