Welcome to Anne and Stewart's 2007 Year in Review! This year can be wrapped up in two words: house and folks. 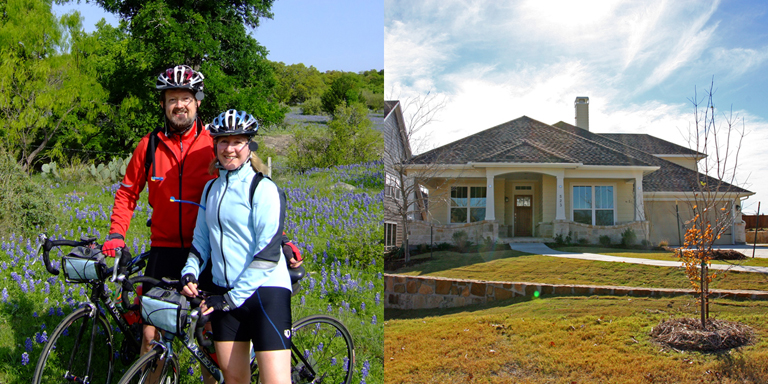 After 23 years in the same little house, we finally decided to pull the trigger and move to a new place. Anne was enchanted with the large porches on these Craftsman style homes going up in Allen, TX, just 5 miles from our current home. They had open floor-plans so we everyone could visit whether cooking, cleaning up, or sitting at the island, breakfast nook or family room. It's a 1 1/2 story home with just one room upstairs, a media room which is something we've wanted for some time. Our lot is one of eight surrounding a green-space and actually includes some rolling hills. The neighborhood abuts a long bike trail and a new retail / loft development is being built within walking distance. It is all landscaped with native Texas plants and we've been surprised and amazed to see the year-long color and texture from these drought-tolerant wildflowers and prairie grasses.

Stewart stalled for some time, concerned about the price, plus we had been considering a move to Austin a few years down the line. But an Easter vacation trip to Austin aligned Stewart's concept of housing prices, and an assessment of our health insurance costs if we retired early was a rude awakening. So we decided to stay in the area, but with a new house.

Once the decision was made, we had a lot of fun moving walls around, picking granite, cabinets, fixtures, lighting, etc. The builder had a "meet the neighbors" Margarita-fueled fiesta in May, and we met lots of folks and swapped building and moving stories. We visit the house in progress every week and have met so many more of our new neighbors while walking the neighborhood that one of them even asked us to watch their home while they're away for Thanksgiving, and we haven't even moved in yet! There is an elementary school across the street so there is an interesting mix of young families and empty nesters downsizing, drawn to the bungalow style homes (hmmmm, seem to be a lot of transplanted mid-westerners!). The porches get everyone out front and the green-space is inviting. This weekend, one of the neighbors had a bounce house set up there which made for funny entertainment from our front porch.

We close(d) on Nov. 30th and plan to be moved in by Christmas. Drop by if you get a chance! 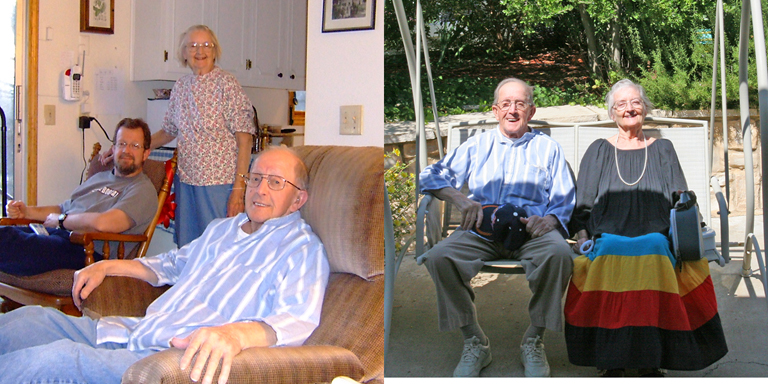 We always thought we'd stay in our current home to be most flexible when Stewart's folks started to need help, but they're like the Energizer bunnies. So, we made our plans while continuing to visit them once every few months. We visited in March and again in June and, although Stewart's 88 year old father is getting more and more forgetful, his 83 year old mother, a retired nurse, was keeping up with things. Over the last few years, they'd agreed to some hired help for their 3 acres of yard work, and limited their driving to short grocery and doctor visits, but other than that, they were doing well. We'd always told Maxine that if it ever got to be too much, let us know.

In July, Maxine made the call. Morgan was officially diagnosed with Alzheimer's and Stewart & his brother made a trip to Kentucky to scope out options. The best answer was to bring them down to live near us. Morgan moved into Creekside Alzheimer's Care Center by the end of July. He immediately started doing better, getting more exercise and particpating in all the daily activities at Creekside. Maxine stayed with us for a month and then moved into the senior apartments next door to Creekside, where she could walk across the parking lot to visit Morgan daily while we were at work. Unfortunately, she seemed more and more stressed and asked more than once to move in with Morgan. Finally, just before Thanksgiving, she became very confused and we moved her back in with us until a doctor could assess her. He strongly recommended she not live independently as she scored as poorly on the dementia test as Morgan had. Luckily, Creekside had a large room available and we moved her in with Morgan. They are so happy to be back together again. With their furniture from home, it's more comfortable for both of them, and they have a great staff to help them out.

We get by to see them several times a week, and just had them over for a great Thanksgiving feast along with Anne's brother Glenn and his son, Andrew. Luckily, our new home is only a few miles from Creekside so it's all working out okay. 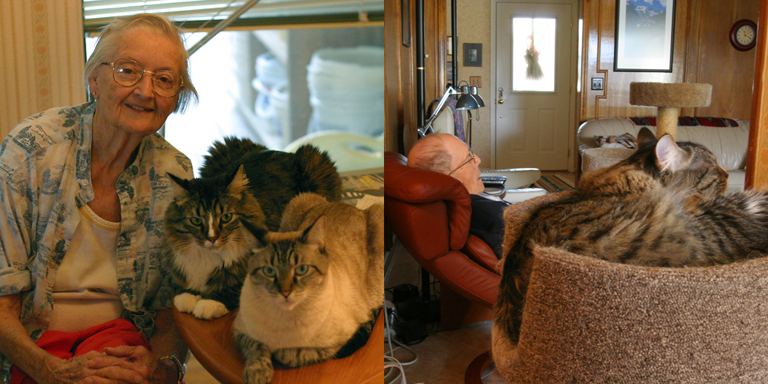 You can reach them here:

They would love phone calls and letters! 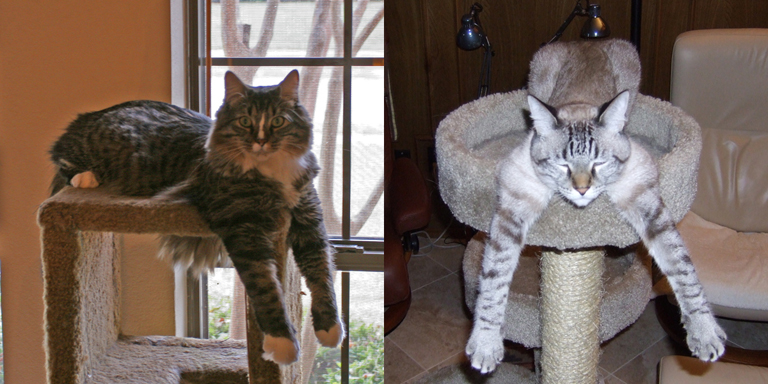 There were a few other things that happened this year, so here's a list to jog our memories when we re-read this in the future (isn't that what Christmas letters are really all about?):

In January, Doug, Manasi and Cassie dropped by to show us Doug & Manasi's slides of their trip to India in the midst of a nasty north Texas ice storm

In February, we went to Houston to visit Stewart's brother and his wife, Morgan T & Mary Jane, and had a nice lunch in Friendswood before joining Trina's and Tom's troupes for Cinderella at Spring Woods, followed by dinner in a box car with a Harry Potter atmosphere.

Later in Feb, we saw Body Worlds with Brandi and Blake, Glenda and Russell. Ewwww!

We had some great get-togethers with our Raytheon buddies, first at Doug and Mary's and later at Doris and Steve's. Ron and Deb won't be joining us again since they retired and moved to Arkansas! How bizarre that folks our own age are already doing that.

Various ailments started creeping up on us: Stewart separated his shoulder, Anne had surgery on her index finger.

We held a drive-in movie in March, our last at our old house it turned out. Autumn was just too busy to squeeze in another one. It was great fun and we hope we can find a way to re-create these at the new house.

In April, we did the Austin trip, having an awesome view of Towne Lake from the Hyatt, then following a realtor around lots of properties near the university and out toward Cat Mountain.

Leaving Austin, we went to Kerrville for our yearly Easter Hill Country Bike Ride. Again, we were mesmerized by bluebonnets although it was chilly enough for jackets this year.

In May, Doug, Manasi and Cassie took us to Fogo de Chao, an absolutely phenomenal buffet extravaganza. Whew, we're still loosening belts over that one.

We rode the Collin Classic bike ride in June, the one dry weekend amidst two months of solid downpour. It managed to replenish the areas water supplies which had been decimated by multiple years of severe drought. With the house and folks, this was our last organized ride of the year, although we made several rides out to the new house and down and around White Rock Lake.

Although we didn't ride that much ourselves, we somehow managed to watch a lot of cycling on TV and the internet: Tour de France, Tour of California, Tour de Georgia, Tour of Missouri (that last one had some great photography courtesy of Anne's sister, Kath).

July 7th we held our last big pool party at our current house. We had about 30 folks this year, and retired "fishy" to Keira, Jim and Valerie's daughter. One of the draws of the new house for Stewart is its lack of pool since it manages to require regular maintenance even though it only gets used once a year!

Our friend, Doris, an avid quilter, took Maxine on a tour of Collin County's finest quilting establishments (including her own add-on quilt room with the Harley Davidson of quilting machines)

Stewart's brother's son, Cliff, drove Maxine's car down from Kentucky in mid-August. It was great to see him and catch up on life in Baton Rouge.

Morgan T and Mary Jane joined us for a quick visit mid-September. They helped out with unloading some of the storage locker and got some time to visit with the folks.

Morgan T and daughter Meredith visited from Houston in early October, and we joined the folks in the garden at Creekside, trying out their swing on a beautiful fall day.

Later that month, we had a birthday celebration for Julie at the Keg, a great steakhouse. Besides Julie and Richard, Ron, Sharon and Veronica joined us. We were also joined by a parade of managers after Stewart found a rat in his creme brulee, a Halloween-themed birthday present for Julie that was much larger and realistic than it needed to be.

Mid-October, we had a Sunday morning visit from Samantha while her folks were out and about. She helped us dig up the elephant ears to bring inside for the year, supplied the cats with a year's worth of homemade yarn toys, and checked out Stewart's new mania for Halloween decorations involving rabid animals.

Just before Halloween, Anne joined co-workers at a friend's masquerade wedding. Yes, you read that correctly. It was a hoot, with attendees (including bride & groom) dressed in Renaissance, vampire, ballerina, Marie Antoinette, Brave Heart, and other attire.

We made a trip to Houston for the UIL high school band competition to catch Emily's oboe solo, along with Tom, Mia, Trina, Steve, Doug, Manasi, Russell, Glenda. It is incredible what the bands do these days. We used to march, carrying music, and turning around whenever we had to walk that direction. Not any more! It's all memorized and dancing sideways and backwards while flags and rifles fly through the air and musicians come to the front to join the timpani's, swapping instruments if need be, to solo at the microphone. Incredible! 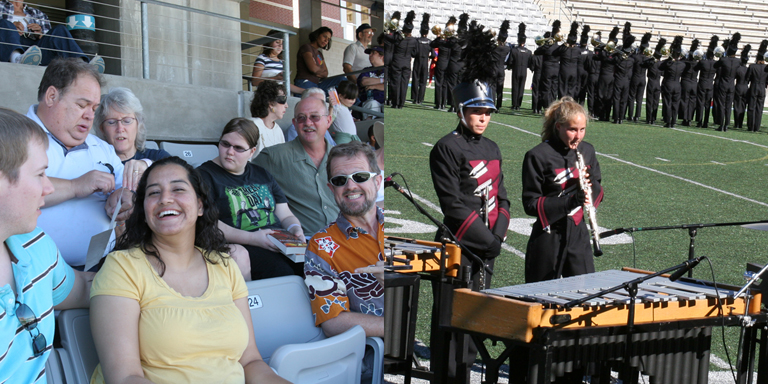 The rest of this year will be filled with moving, moving and more moving! Then there will be plenty of days in the Adirondack chairs with our feet up on the front porch.