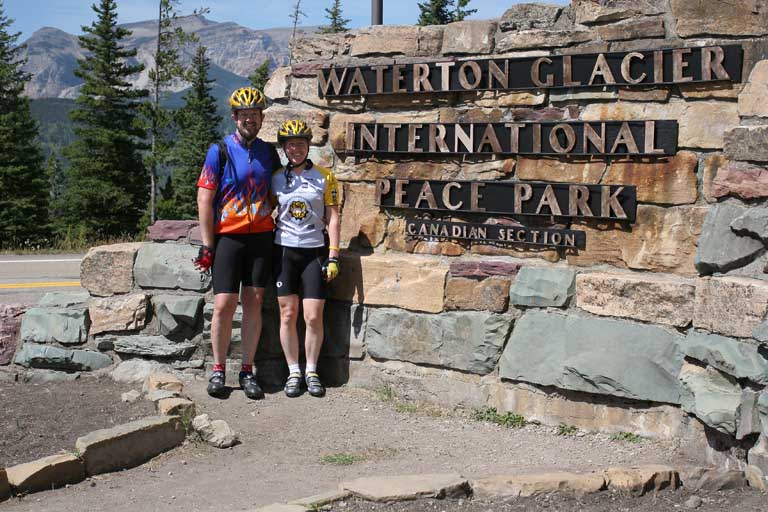 Here we are on the Canadian side!

This has been a very mixed year for us. There have been some sad times, but there have also been good times with good people. Anne's brother Tom's wife, Joyce, passed away in January. Joyce was a wonderful woman who battled kidney disease. We really miss Joyce and she lives on in our memories and those of her family and friends. In July we lost our younger cat, Louie. He was 14 years old and succumbed to a stomach ailment. Then we lost our other cat Murky in October. After 20 years we really thought she'd live forever. Others close to us lost family, still other lost pets too.

It keeps things in perspective during this season of materialism that it's the people that matter, the family, the friends and yes, even the pet-Americans.

WINTER: The holiday season wrapped up 2004 with a Christmas Eve tradition: Tuba Christmas at Thanksgiving Square in downtown Dallas with friends Alan and Maria and their two children, Samantha and Ethan. We took the DART train and sang Christmas carols in the cold. Stewart recorded it and turned it into a very strange audio CD.

After a Christmas trip to Houston, Anne's nephews and their girlfriends (Doug & Manasi, Russell and Glenda) joined us for a New Year's Eve trip to the Dallas Aquarium. It's a pretty awesome open setting with several stories of spiraling wildlife. Sloth’s and monkeys swing through the upper jungle vegetation while manatees lumber along the lower everglades.

February includes lots of birthdays, including Anne's sister, Trina, her brother Tom, and his daughter, Mia. Anne was happy to learn they had a PlayStation and with Mia's choir and her sister Emily's oboe expertise, Karaoke Revolution was just the ticket. The audience did standing ovations! Mia also showed us some fancy feet doing the Dance Dance Revolution, and, later in the year Emily got accepted into the Houston Youth Orchestra.

In March, Stewart visited his parents in Kentucky. His brother Morgan's daughter, Meredith, had given his mother, Maxine, a book called The Story of a Lifetime by Pamela and Stephen Pavuk. It is a collection of questions useful for triggering memories that can be captured as a person's autobiography. Stewart used it to interview Maxine and gathered over 6 hours of audio including her childhood in Green County, Kentucky, later attending Jewish Hospital to learn nursing, her nursing career at Ireland Army Hospital at Fort Knox, meeting and marrying Morgan, raising her two boys, and adult life to this day in Radcliff, KY.

Maxine and Morgan being interviewed for "Story of a Lifetime"

SPRING: We hosted a drive-in movie in April, watching The Incredibles projected against the brick wall lining our alley, with friends and neighbors and great snacks at intermission.

Then it was back to Houston for an amazing play, 14 Iris Lane, by none other than Melanie Webb, Trina and Steve's daughter. She and her friend, Paul Sabala, wrote the play, the music and lyrics, selected the cast and directed it! It was awesome: a little dark, some great humor, and a surprising twist at the end.

Anne's sister, Trese, took us (Anne, Trina, Steve, Brandi, Tom, and Mia) on a geo-caching expedition, her new passion. If you haven't tried it, it's a hoot! You get GPS coordinates for a treasure off an internet site, but it only gets you close. Wear long pants and hiking boots because you'll be tromping through the woods. We found ours in an ammunition case dangling from a massive tree in the midst of an inner-Houston forest.

Back to Houston for Melanie's graduation, including the ceremony itself, and a post-graduation party. The site included a stage so after years of doing plays together, the drama troupe couldn't resist giving us some encores of their favorite tunes, including Paul and Melanie reprising Alone in the Universe from Seussical the Musical, a tune they had performed at the national competition.

SUMMER: In June, we went to Kentucky for father's day and Stewart interviewed Morgan using The Story of a Lifetime, again gathering 6 hours of audio, including Morgan's childhood in rural Kentucky and Shakertown, his military service and time as a Prisoner of War in Japan, his marriage, fatherhood, and continuing life in Radcliff.

We both got new bikes this year and now we fly! Okay, we can manage 17 mph for a 60 mile trip which is pretty good for us old farts. One of us (remaining nameless) is now getting AARP invitations.

We had a pool party in July and Trina and Tom's families came up from Houston, and we were joined by Steve Brown, Jim & Valerie, Nancy & Paul, and Marie & Alvin and their families too. Little did we know what Harry Potter fans we had amongst us, so at midnight we found ourselves (Anne & Stewart, Melanie and Brandi) at the local Albertson's grocery store, snapping up the last four copies of Half-Blood Prince. Noses were buried in books between spurts of swimming for the rest of the weekend. 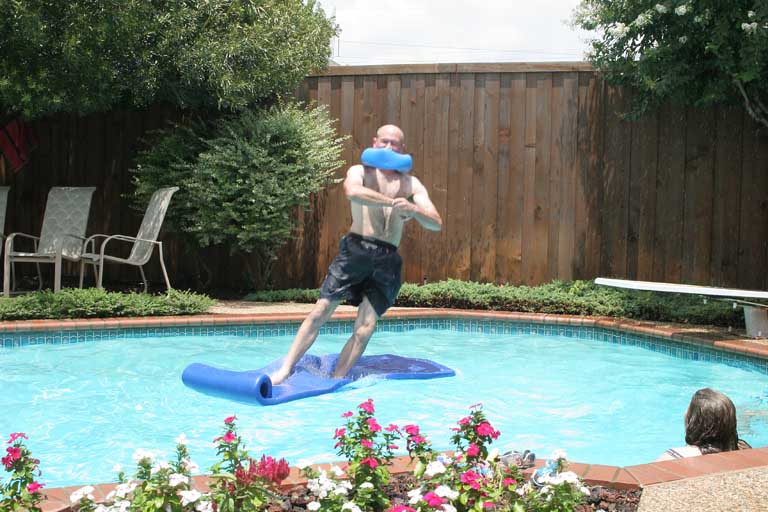 In August, we were off to Montana for a Backroads trip to Glacier-Waterton International Park (see first photo). We biked from West Glacier, Montana to Waterton, Canada and back, crossing the Continental Divide twice (ok, we admit it was at the lowest crossing points possible). It was gorgeous, although Anne was freezing and figured out that they call it "Going to the Sun Road" because you won't feel the warmth of sunlight until you hit the summit, four hours after starting the climb!

The last week of August brought the annual Hotter'N Hell Hundred bike rally in Wichita Falls, TX with Julie & Richard. Shifting winds and rainstorms gave us a tailwind most of the way around the 100 mile loop and it didn't break 85 degrees the whole way. It defied the name but the ride was pure magic!

FALL: In September, Stewart got a call that his father, Morgan, had fallen. He avoided major injury but had a heck of a headache, couldn't turn his head, and for a few days, didn't recognize anyone. Stewart immediately flew to Kentucky to help out and Anne joined him a few days later. Morgan started physical therapy and was mostly back to normal in about a month.

Coincidentally, we were in Elizabethtown, KY when we found out Cameron Crow, Orlando Bloom and Kirsten Dunst were in town for a parade celebrating the movie premier of Elizabethtown! We had a good time laughing about the timing over coffee with our friends the Kelley's, Mike, Anne, and their daughter, Chelsea.

As Hurricane Rita bore down on south Texas, we anticipated extended stay guests. Doug, Manasi, and Brandi tried to evacuate Houston. Stewart's brother, Morgan, and his wife, Mary Jane, tried to evacuate Friendswood south of Houston. All turned around several hours and a few miles later. Rita made landfall near Beaumont so all Houstonites were okay. It was unclear how that was a "successful evacuation".

The night before Rita made landfall, Murky bit Anne, annoyed at getting her hair pulled during a combing session that caught a matt. Anne's hand got infected and she went to the local doc-in-a-box for some antibiotics, which caused the city of Plano to arrive on our doorstep to quarantine the 20 year old cat. Luckily, they let her quarantine at home, only days before her demise. Had she not made it through the 10 days of quarantine, Anne would have had to have rabies shots!

In October, Anne went to Santa Clara, CA for a conference. This gave her the chance to visit with friends Jane, Bill, and their son, Connor in Palo Alto. We had a great evening at their house, enjoying the Bay Area weather on the back deck, a quiet dinner (luckily Jane's finger wasn't severed), and even had time to tour the peninsula the next day before Anne returned to Dallas.

At the end of October, we went back to Houston for Brandi's Senior Day band performances, including the half-time show and the competition show after the game. We'll miss those trips to Tulley football field.

The weather in North Texas stayed warm right on into mid-November, so despite the busy fall, we hosted a late season outside drive-in movie, Labyrinth. Some attendees arrived via the way-back machine, former co-workers from our early days in TI's Defense Group.

The following week, we attended a pre-release viewing of Harry Potter and the Goblet of Fire with Julie & Richard. This was a charity event that included dressed up folks and give-aways. The young fellow seated next to us sported a nice red lightning bolt on his forehead which his dad felt would last since it was applied with a Sharpie.

Just before Thanksgiving, the weather cooled and we headed to KY to visit with Stewart's parents. It was really cold there, hitting 16 degrees Thanksgiving morning. But the company was warm, and we had a great time decorating the holly tree outside their screened-in porch. Aunt Roxie and cousin Joyce joined us for the Thanksgiving meal.

We did work some this year too, Stewart at Raytheon with the F-16 program and Anne at TI in the DLP Products group. Anne was elected to the TI Technical Ladder this year!

Anne works out while Stewart relaxes