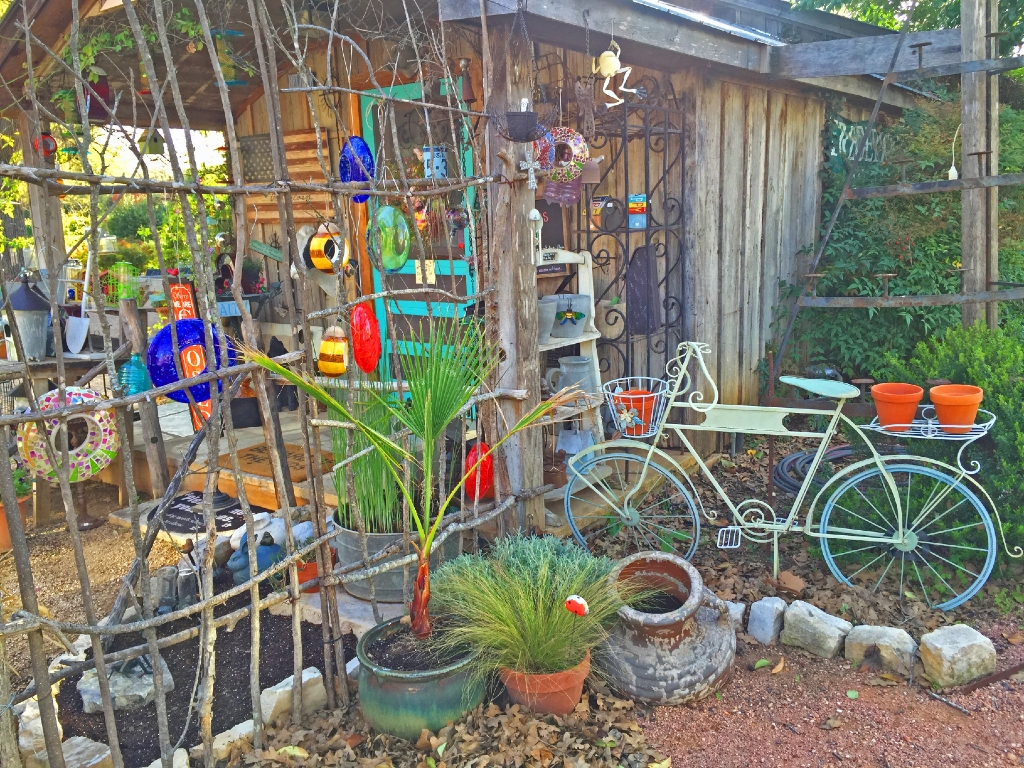 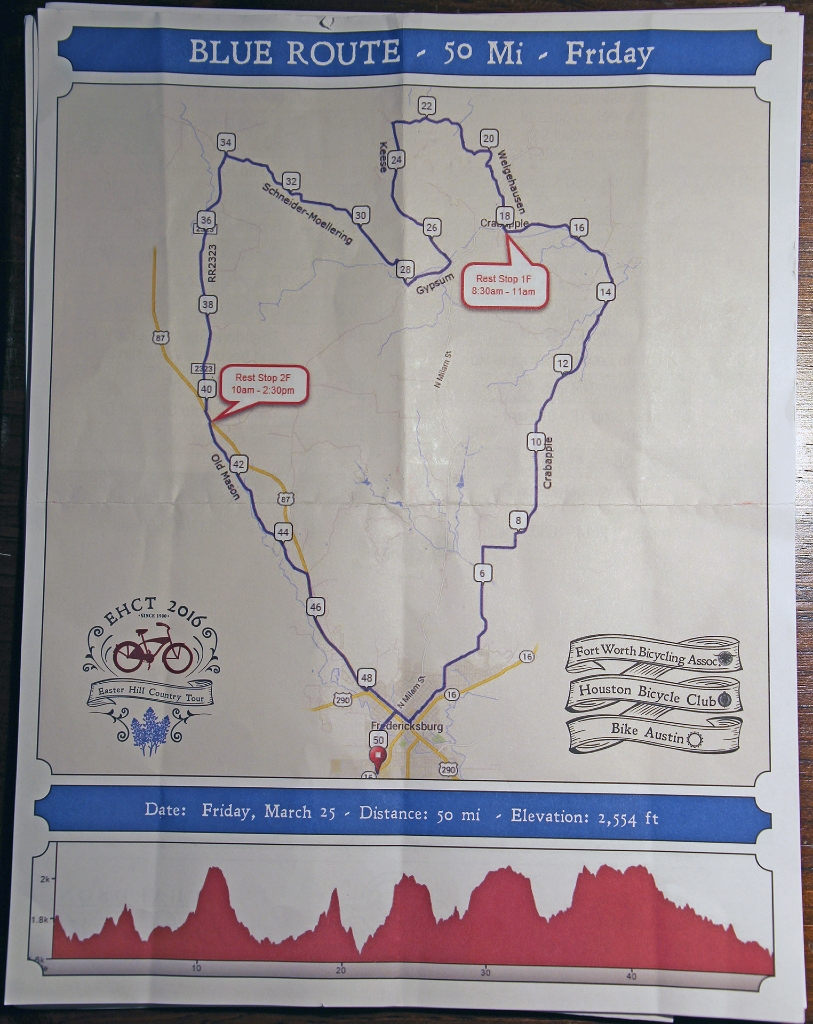 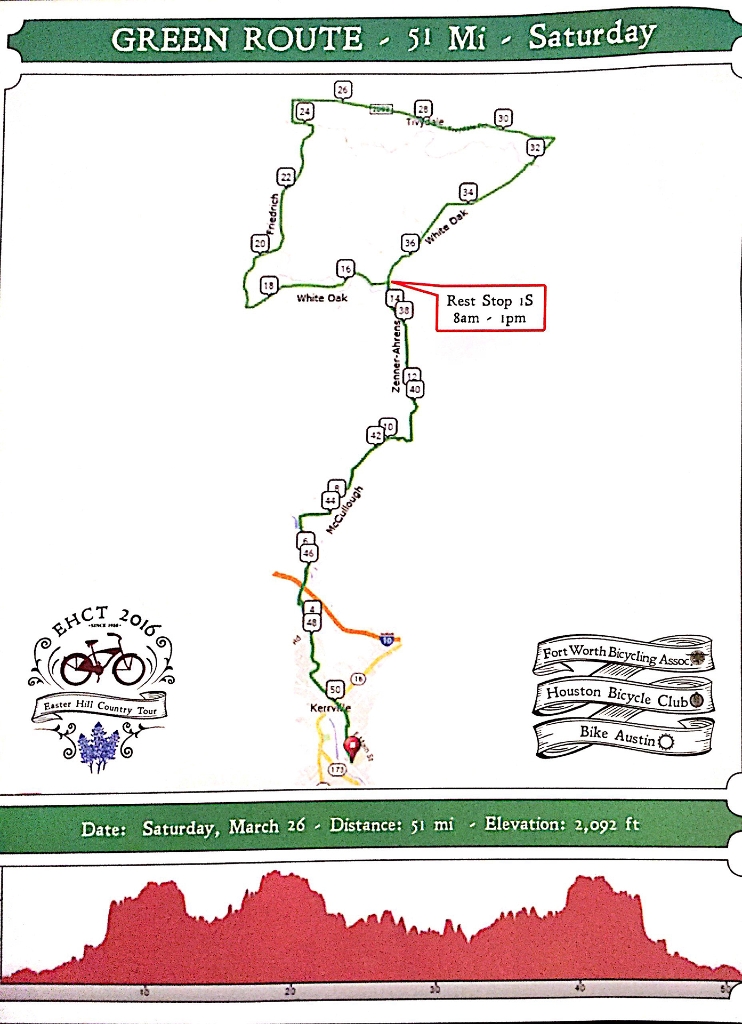 Friday and Saturday's Maps Around Fredericksburg and Kerrville, TX
03/24/2016 Thursday

We packed up and headed out about 10am, in no hurry, aiming to get to the Hampton Inn in Fredericksburg about 3pm. Roads were clear, weather was nice, good day for a drive. Around lunch we pulled in to a Burger King. They got these new grilled hot dogs that we wanted to try, since our last hot dogs were back in 2007 at our last pool party at the old house. They were pretty good, although Stewart's hot dogs on the grill were better.

There were tons of bluebonnets, Indian paintbrushes, daisies and primrose on the roadside. They really picked up around Waco and all the way south. In Johnson City we turned west onto 290 toward Fredericksburg. Since last year seems there were lots of new wineries. Stewart talked with Todd on the phone, they were still at the Becker Winery sitting out on the porch, so we drove to meet them, CoonDog, Todd & Kim.

It was really fantastic sitting out back of the winery, drinking wine, hearing about Todd's broken toe & boot (ouch!). He had a special boot he was going to use to drive with while Kim was out bicycling, and it worked good! Todd went in and got us wine and some beautiful Becker wineglasses as souvenirs. Eventually we figured out we probably should get off our butts and head on in to the Hampton. So relaxed.

The Hampton Inn in Fredericksburg was as we remembered it. They were updating the rooms and ours was about half done. Fully functional, but missing some art and other stuff. We got them to install a promised refrigerator for Anne's 2 bottles of white wine brought in TI foil lined lunch bag, and Kim had brought another bottle of white wine for Anne so she was ready for the party.

Stewart had called ahead and setup dinner at Auslander Restaurant just 3 blocks from the Hampton down Main St. Kim drove us (an easy walk there, a much harder walk back!) and we met up with Jackie and Beth in lobby, John and Niles joined us and we headed all the way to the back where we got a large picnic table. It was a bit sunny for a while so Stewart borrowed Beth's lady cowboy hat and Anne borrowed her sunglasses.

Kim and Todd had decided to eat Vegan and were on day 30, losing weight and getting healthy. Auslander had lots of choices that worked for them, along with lots of beers, most we hadn't even heard of but ordered anyway. We all ate and drank and caught up on what everyone had been doing over the year.

Beth and Jackie told stories of Jackie trying to kill Beth on biking adventures, riding the railroad inside the rails with a road not far away, 20 pound backpacks, storm on the mountain with Jackie taking on both packs, first doing relays then one on front one on back while Beth's blistered feet and fear of nearby lightening had her freaked out, then camping on a slope and having to 1-2-3 now skootch back up.

We all headed over to the Fredericksburg High School for the start of the Friday ride. They had setup a "Registration Light" there where we could get maps but nothing else. They seemed to have lost our (A&S) registration info but were gracious and let us ride, gave us maps, said we'd figure it all out Saturday morning at Schreiner University in Kerrville.

John had gotten a beautiful new Specialized bike prior to the tour and put his legacy Speedplay pedals on it. He then forgot his shoes leaving them in the garage at home. Quite a problem! Dave remembered seeing a bike shop in downtown Fredericksburg so John made plans to head over there and buy some "rat trap" pedals. He could wear regular athletic shoes with those although it would still be tricky. He had also forgot his water bottles (sitting beside the shoes?). It was 38-ish degrees that morning so we weren't too concerned wasting time as John figured it all out, the temps would climb enough to make it less uncomfortable.

On the way to the high school we got a msg that Kim was doing a deodorant run, despite her long checklist, she had forgotten it. Turned out this was a recurring theme for all of us so we called it "Pulling a John" and teased each other as it happened over and over.

We (Niles, Dave, Kim, A&S) said goodbye to Todd and got on the road about 9:40 and promised to meet up at rest stop #1 where Jackie and Beth were working to support the Fort Worth Bicycle Club which was hosting this year. We heard from Julie and Evan that they had stayed in Kerrville and would ride there unsupported on Friday then meet us later for dinner in Fredericksburg.

We started the day with tights, jackets, arm warmers and long fingered gloves. Beth had offered to take our heavy clothes at the first rest stop. It warmed up quickly and we were glad to see and hear the cheers of J&B as we rode into the stop, Jackie in a poncho and Beth in fringe and her cute be-bicycled cowboy hat. Got a couple great group shots of us all at that 1st rest stop (who is that guy in on the left???). There we reconnected with John who rode up, now with new pedals, and found out he had forgotten his water bottle. Kim loaned him one of hers.

We ended up turning the 51 mile route into a 43 by removing the first bump-out. Niles peeled off at the first rest stop to do the bump-out and ride the full 51 mile route.

The route north out of Fredericksburg was along Lower Crabapple and featured rolling hills with multiple 10+% grades and cattle crossings. We didn't get a chance to do the Willow City Loop this year instead the route looped north and west on classic Hill Country ranch roads. The rest stops were kinda far apart, about every 18 miles so we all had to plan ahead for water and pee breaks. After the second (last) rest stop Kim was strong and pulled us into town with a 20+ mph headwind. Thats the leg where we passed Mary Seaborn, one of Nile's friends from last year.

With as many wildflowers as we saw along the roadsides, there were not many wildflowers along the ranch roads. But beautiful skies, vista views, prickly pear, cattle, massive live oaks, skeletons of former massive trees, sheep, deer, classic hill country tin roofed limestone ranch houses, fields dotted with thousands of rocks.

Back at the Hampton deck patio, Dave, Todd, Kim, Anne & Stewart hung out with some wine and beer, and Hampton Inn cookies. Aaaahhhhh. CoonDog caught us up on the RV park action, including some tent thumping near the showers that made him conjecture about the participants.

Todd had found a great restaurant for dinner, the Fredericksburg Herb Farm, a quirky chic combination of tiny cabin rentals, spa, herb garden, gift shop and restaurant. They had tons of Easter eggs decorating the entrance. A long table accommodated our entire group: CoonDog, S&A, J&B, T&K, Julie & Evan, and John. We heard about Todd's day at LBJ Park, placing dinner plates at exact distances to practice fly casting, and explaining to a park ranger that it was intentional, nobody had lost they dinner ware! The Herb Garden led to lots of discussion and perhaps a future "herbal" adventure to Colorado. The food was amazing, including the hard crusted baguette with rosemary butter, rice pasta with garden vegetables, fried kale, and tomato basil pizza with rosemary crust. Julie, Evan and John talked of their experiences on the Fort Davis Cyclefest and decided we all need to do the next one in September.

After dinner we stood around the fire and talked. Beth, Julie, and Coondog finagled a tour from some of the guests of their little cabin there at the Farm. Very cool!

Today we drove south to Schreiner University in Kerville. At registration, Beth was running one of the tables and sure enough, no record of our registration! Stewart had checked email and charge histories and it looked like we really did forget to register (??!). We paid up and even bought extra Ft. Worth Cycling Club T-shirts. Charisse joined about 9:40 and we met Julie and Evan, and we all headed out.

Easy ride out of Kerrville heading north and west, then at about 5 miles right turn and start climbing, the first serious climb of the day at 12% grade. We regrouped after that first steep hill where Evan, the ER Doctor, identified all the fractures in Stewart's skeleton jersey.

Dave and Kim were not feeling very well, and John was in his rat trap pedals, so they opted for the 33 miler. Julie and Evan chose the 61 mile route, leaving Charisse and us riding 51 miles. We all road together for the first 14 miles to RS #1. Saw REI Katy there, another of Niles' friends from last year.

Nice rolling hills but several steep climbs, with a headwind from the south, and S&A had trouble keeping up with C's pace. But she backed off and told many stories: attending Jack Kilby's Nobel Peace Prize ceremony, dancing with George Hincapie at the Tour de France in Paris, and driving the telescope at the MacDonald Observatory at Fort Davis.

We longed for a rest stop so Anne quit drinking fluids trying to stave off the pee impulse but 23 miles from the last one we stopped and ate our bag food and Charisse convinced Anne to hydrate like crazy. Soon the rest stop sag drove up and we got loaded up on pickle juice and peanut butter pretzels and water. Two more cyclists pulled up and we found out there were no more rest stops. So.... 51 miles with one rest stop. Luckily the sag truck saved us, Anne chugged her pickle juice, and we were in pretty good shape for the rest of the ride. We found llamas as we got closer to town and enjoyed the photo op break.

As we pulled into the parking lot, Anne texted T&K to see if they were still at Dave's. Todd called right back with the bad news: Dave's closed!!! Taken over and being re-built. Waaahhhh! They were taking CoonDog back to J&B's RV so we grabbed a shower and wine and joined them at the picnic table. All commiserated over Dave's but agreed the camaraderie of this comfortable group would be fun wherever we gather.

We proved it again later at dinner at Altdorf's. No oompah band but a great picnic table near the bandstand where Dave assisted the Asian girls with their photo ops, we made much racket laughing over beers with our patient server Taylor, and learned about squatty potties and proper wiping technique. Beth brought her own mug with rum and peach tea, and we picked out beers with he help of Taylor who shied away from the local beers because "they're not good". She got good tips!!

Another year under the belts! Too much fun!!!