In this note I will jot down everything I remember about the elephant ears that are growing in our front and back yards. 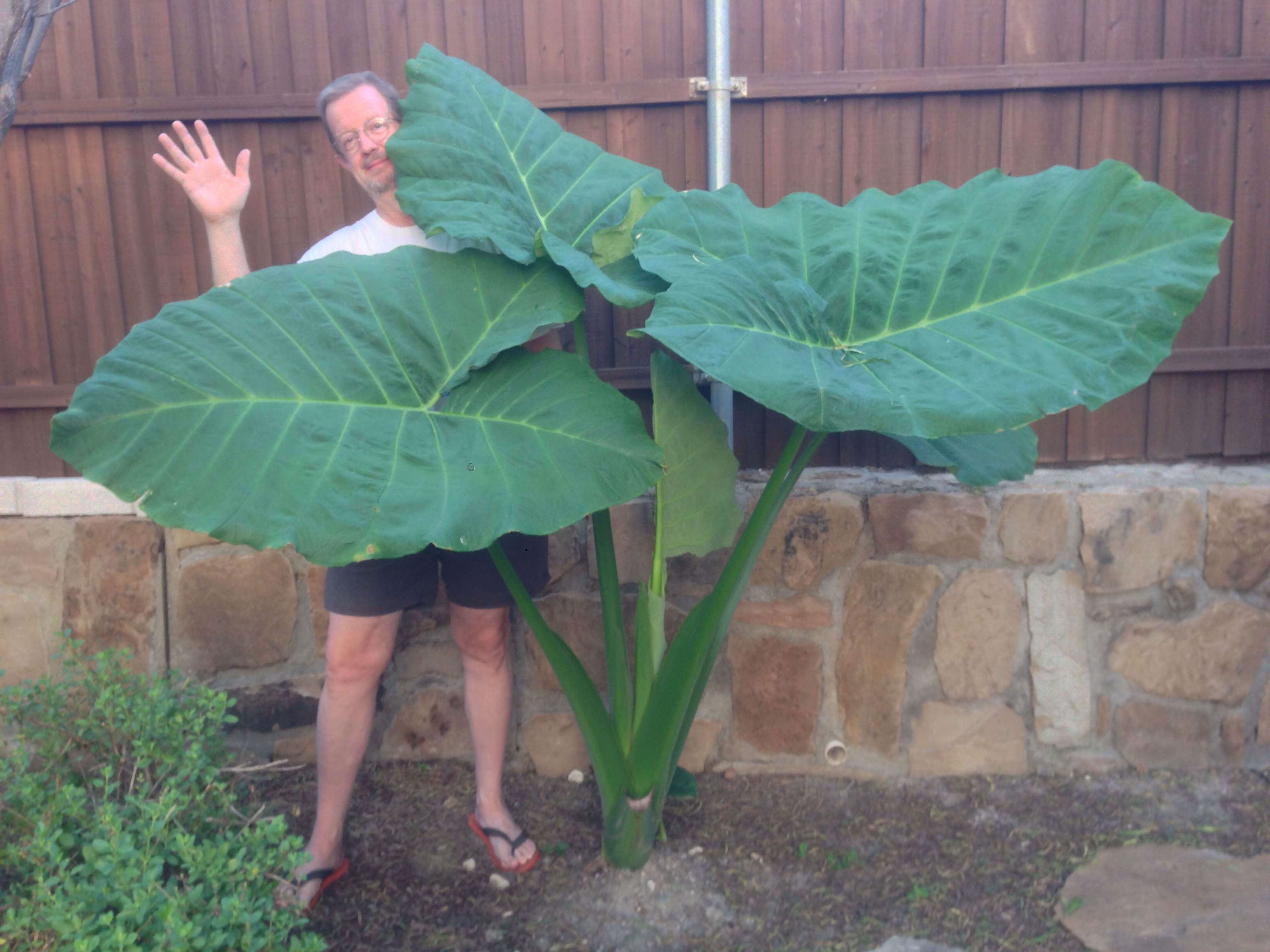 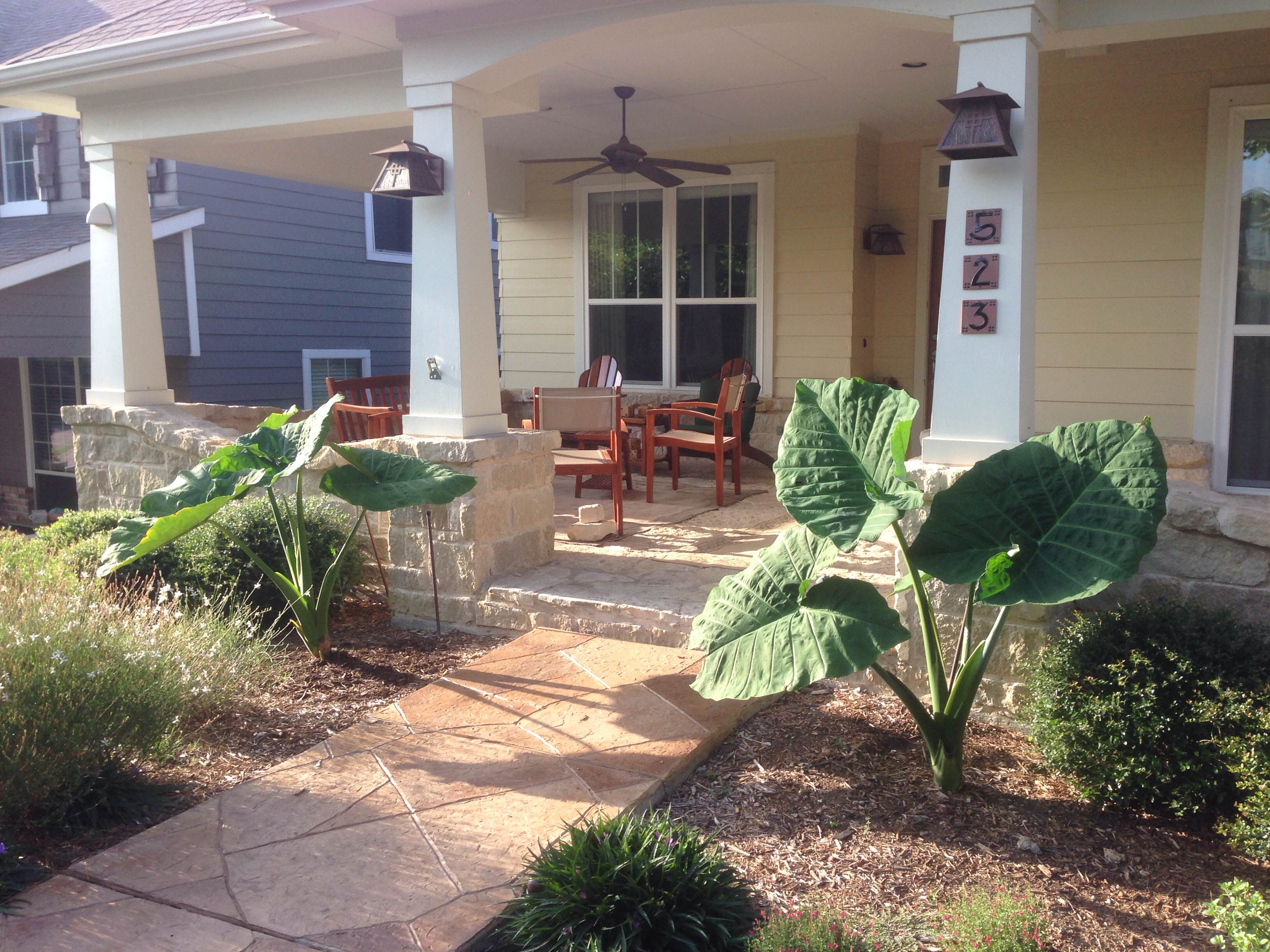 Sometime in mid-1980s Anne and I were visiting my folks in Kentucky, Morgan and Maxine French. Back then we would drive up, stay a few days, then get up really early, like 4am, and start driving back to Texas. Just before we headed out my Mom grabbed a shovel and a flower pot, told Anne to follow her into the woods. She found an old rotting tree and dug out some that "good dirt". She then cut out one of the small elephant ears that grow up around the big ones and planted it into the pot, put it in the car, and sent it home with us. Anne remembers this very well.

At our home on 6308 Bronze Leaf Dr, Plano, TX we planted this original elephant ear beside the garage in a small strip of dirt between the walk and the garage. It was a north facing wall and got plenty of shade. The elephant ear loved it there and grew enormous ears. That first ear would grow these little shoots in the dirt around the stalk, we'd re-plant some of them along the walk there and let them grow, leading to several elephant ears growing each season. We would pot the main ear every fall and re-plant it every spring.

When we went to California in 1989 we left it in the pot, back in the study, and asked our renter to water it once a week until we got back. Here is a photo of the elephant ear in a pot sitting on the back porch from the Fall 1990, after we had returned, 9 months later. 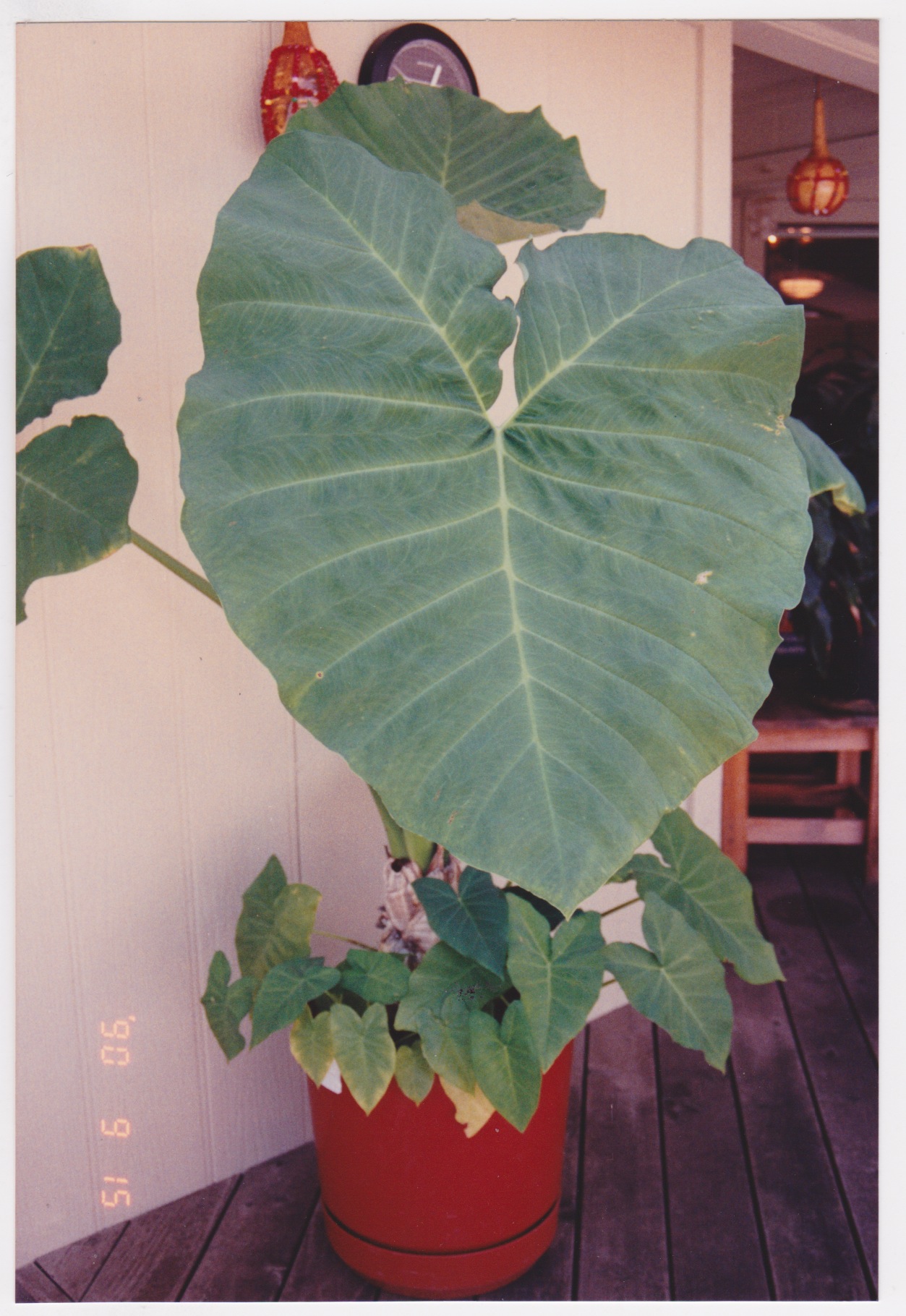 My earliest memory of the elephant ears is in Kentucky, probably in the late 1970s.

My brother Morgan has a recollection of a photo of me on his Honda(2) motorcycle, with a helmet on, with the elephant ears in the background, probably about 1972, but neither of us can find the photo. The earliest they would have had an elephant ear is summer 1969. Morgan can't remember any at their first home on 551 Brookwood Dr in Radcliff, KY.

I can't seem to find a photo of the ears growing in front of their house (although I can clearly remember some photos, I'll need to keep looking). Here is one of the elephant ears growing at my Mom's friend Mildred's home back in 1988. These also came from my folks house. That's my Mom, Maxine, in the photo there. 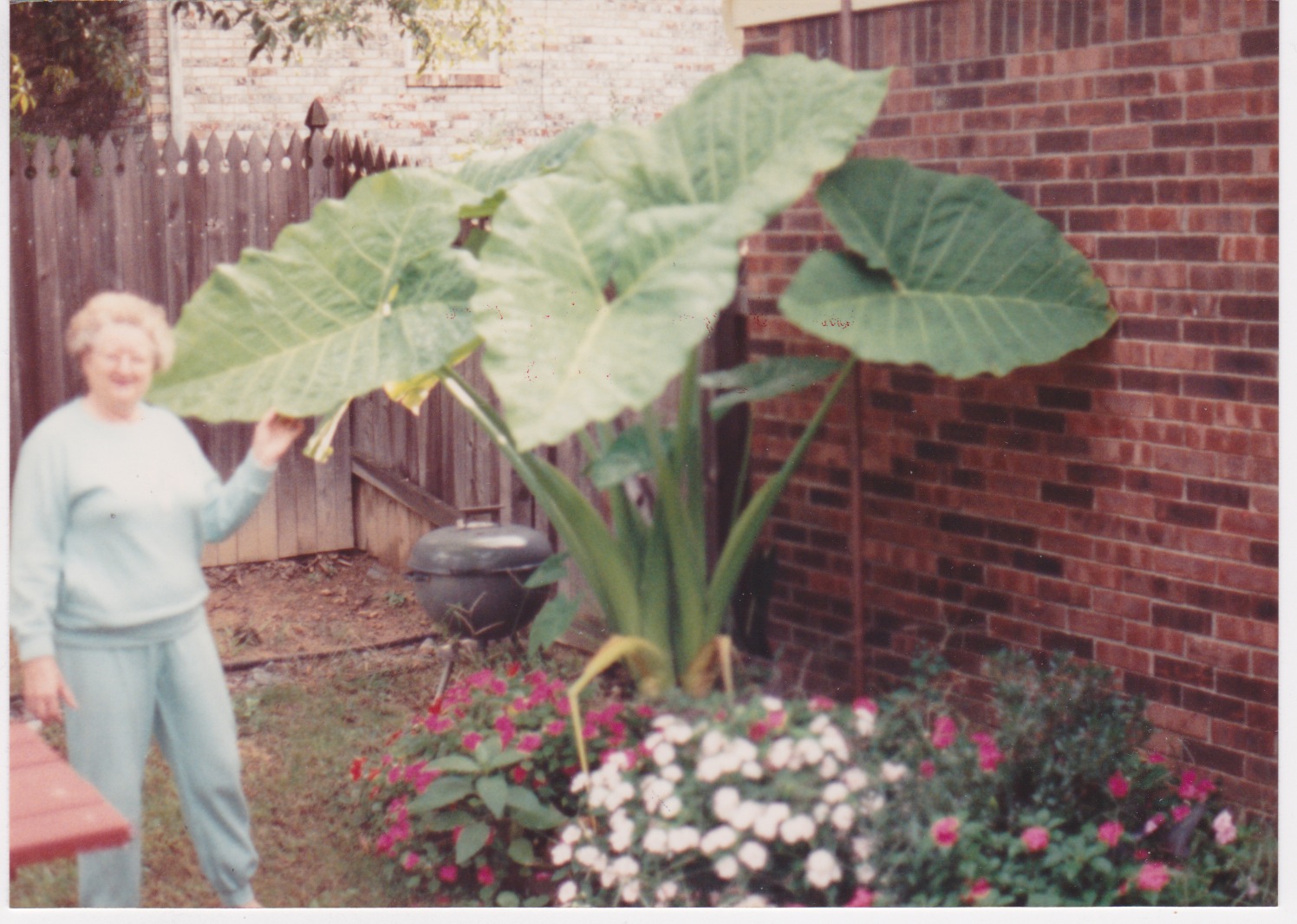 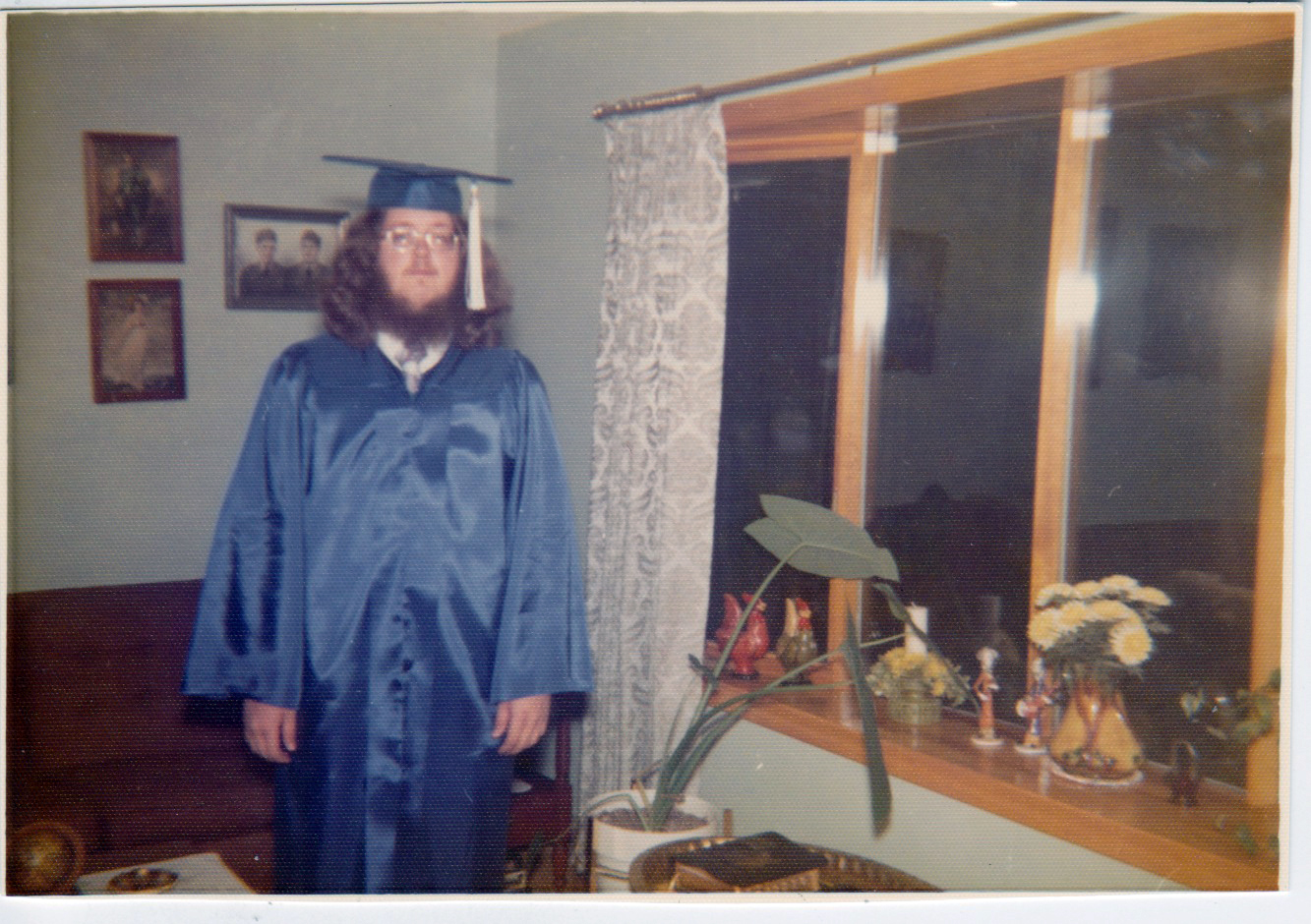 When fall came, before the first frost, Morgan and I always had the job of taking a steel garbage can, one of the large ones, and the tractor with the trailer attached, out of the boat house around to the front. We would cut all the leaves off the largest elephant ear except the most current one and start digging, dig way down below and around the root system then carefully lift it all out, along with enough dirt to fill the garbage can and have the elephant ear properly planted in the garbage can.

[Morgan: Standard size, thin gauge galvanized trash can, 3 ft tall, 20-30 in diameter, handle on each side.]

Then we'd load it onto the trailer and pull it back around to the back. The folks had a split level house in the back where the basement had a door level with the concrete driveway and deck. Morgan and I would back the trailer up to that door and unload the garbage can onto a furniture roller and roll it into the basement. The basement had these windows way up near the ceiling, maybe 20" x 18". On the outside there was a semicircular metal retaining wall, maybe 18" deep, that held back the soil and allowed sunlight to filter down into the basement. We would roll the elephant ear over until it was just under one of those windows. Done!

Over the winter we would water it once a week or so and it would slowly continue to grow. With each new stalk the ear would get smaller and the stalk would get longer. By the end of the winter the leaves would be maybe 12-18" in diameter and the stalks would be 7 ft tall, reaching all the way up to the window and covering it to get the sunshine.

In the spring, after the last frost, we would reverse this and bring it back out planting it in the same place in the front yard.

I have a vague memory that my folks got their first elephant ear from Florida when they went on a vacation there sometime in the 1970s. The tradition of bringing it inside every winter before the first frost and replanting it after the last frost in the springtime continued unbroken from that first elephant ear.

The ones we have here at our current house are an unbroken chain from that first one in the mid-1970s making them at 35+ years old. As with my folks tradition, every winter before the first frost we dig 3 of them up and bring them inside, stashing them in the Norton bedroom beside the windows. They love it there and continue to grow, getting smaller to fit their pots. Then in the spring we replant them, one in the backyard, two in the front.

[Morgan - Mary Jane remembers that we gave them their elephant ears, in Houston, when we moved into this house, 523 Seeport, sometime in the last 3-4 years.]