by Anne and Stewart French 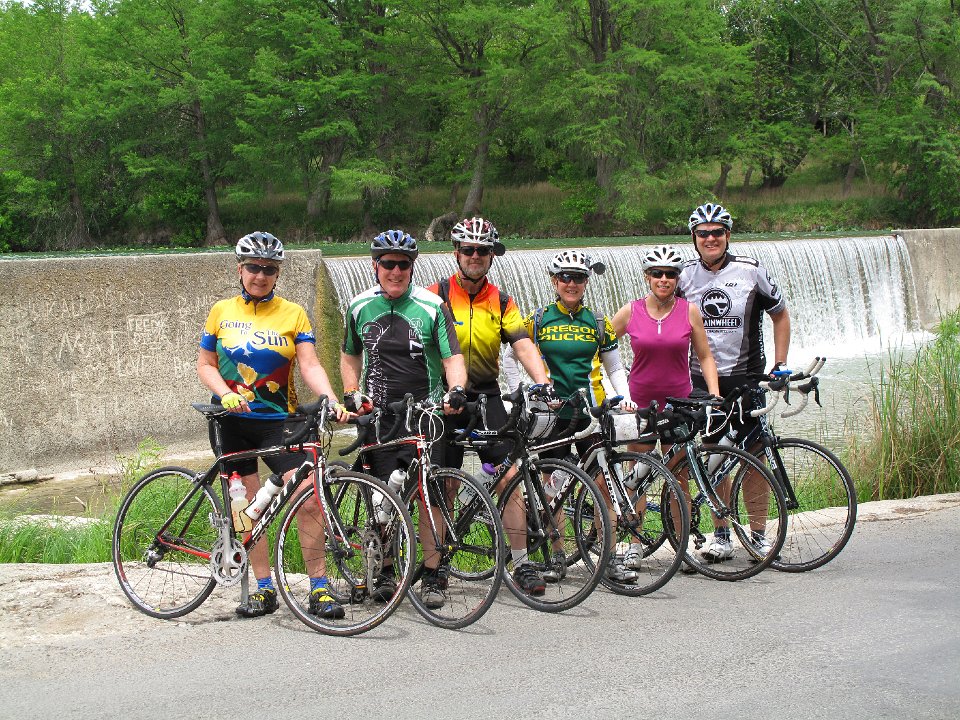 No time pressures this trip! Finished our Sudokos, crossword puzzles, had some breakfast, packed up, and drove to Buda, TX, where our friends Todd & Kim have their beautiful new home. We once again chose to bypass Austin's crowded freeways and took the 130 loop around the east side. That turned out to be spectacular with fields of bluebonnets, indian paint brushes, wild mustard, and purple verbena. We arrived about 4:30pm and reunited with CoonDog (Dave Cooney), met Peg and heard about her broken foot, and got settled in our room. We were glad Peg she could make it with a broken foot and hopeful she could navigate the hills. That night we loaded up and headed to Salt Lick Barbeque, with one singer/guitarist entertaining us, we picked up beers at the Wine Cellar, got our pager and grabbed a picnic table under the massive live oaks. After a while we got paged and got in line for a server (and this is on an off night). It was a bit chilly so we ate inside. Three meals shared among 6 people, with ribs and sausage and brisket, very moist and tender ... a delicious dinner! Anne will do just the ribs next time but it was all good. Cobbler for dessert. Yum! The pit was amazing, huge flaming smoky and being worked by 5 or 6 guys. Great t-shirts: "I just got licked and I've never been so satisfied." Back at the Joubert's we sat on the patio, shared some wine and chatted late into the night.

Breakfast at the Joubert's included granola, fruit, yogurt and excellent coffee, then we drove to Fredericksburg and tried to do some sight-seeing at the Wildseed Farm but it started raining. We got a few shots but the gift shop was nice (Anne got new bluebonnet earings) and the free samples at the restaurant were great, especially the jalapeno jelly. Once in Fredericksburg, we ate lunch at Auslander (cuckoo clocks, giant fireplace) shared the German spring roll sampler. Walked the town looking for coffee, stopped in the kitchen shop where Cooney was looking for a rumtopf (crock to make rum fermented fruit). No luck for him but Anne got a microwave egg cooker. Then on to the Java House with the Texas mural covering the entire wall. Peg talked about her advocacy for the elderly in her role as an ombudsman for nursing homes, such a great service.

After coffee, we went out to Becker Vineyards. The Joubert shuttle arrived before us and were in the process of wine tasting so Stewart and Anne went on the walking tour. Really nice, and heard how the chardonnay grapes are now brought in from Lubbock since a grasshopper infestation killed all their vines. They have American and French white oak casks, and a display of the making of the cask. No glue!

A&S went on to Kerrville while Jouberts, Peg & Dave went to James Avery so Dave could get his wife, Linda, some jewelry for her birthday (Sunday).

Then on to Kerrville where we checked into the YO Ranch Hotel. It's very rustic and is full of a diverse combination of cyclists and hunters. It turns out the YO Ranch is 40,000 acres of wild animals (game apparently) and they take tourists on both photography and hunting expeditions.

On to packet pick-up where we caught up with Niles and met a new friend, Mary. We all went to Francisco's for dinner, a restaurant that was clearly Mexican but people kept calling Italian. We wanted to sit outside like we did 3 years ago, but it was a bit chilly and damp. They have pretty good food and we enjoyed ourselves with drinks and conversation.

Back at the YO A&S called it a night but found out later that Kim, Todd and CoonDog hit the town, first the YO Ranch Bar which was disgustingly smokey?!! and then on to the Grape Juice wine bar. When that closed at 11pm they went to a hole in the wall called the Watering Hole. Dave photo bombed the band and many beers were had by all.

Breakfast at the YO buffet (it was ok but no bananas and Folgers ... yuk), then on to the first day of riding. All agreed on the 51 mile route which turned into 58 after we decided to ride to Schreiner U from the YO. They now have a bike lane on 16 and Stewart led the 6 bike train through the lights, pausing to regroup when the lights caught the last riders. At Schreiner, we met Charrisse in the west parking lot where she had just discovered a 4 inch slash in her driver side front tire. Yikes! Anne was happy to see her old bicycle, Consuela, which Charisse had purchased from her back in 2012, after Charisse's accident.

The day turned out to be perfect for cycling, tons of billowy clouds kept the sun off of us but let enough through for great photos. The temps were in the high 60's/low 70's and there was zero wind. Lots of chip seal and not many bluebonnets (past peak) but the scenery was stunning nonetheless, huge prickly pear, majestic live oaks, fields of white rock, soaring buzzards, deep blue sky, many cattle guards, reflections of clouds on the river coming into town. It was so quiet you could hear everything. There were birds chirping at the rest stops. There was a Democratic Party rest stop where Anne, Charrisse and CoonDog got Wendy Davis tattoos and signed a message board for her quick recovery from neck surgery. The Boy Scouts manned the second rest stop. The stops were about 15 miles apart and included peanut butter and banana sandwiches so we skipped lunch. Coming back into town, Cooney spotted Thai Ocha, a beautiful restaurant on the river hidden from the road by the massive oak trees. He turned around and made reservations for the patio right there. Back in town, Charisse wanted a beer before heading back to Schreiner so we grabbed some at the smelly bar and went out to the patio by the pool where Charisse wrapped Peg's broken foot in orthopedic tape to stabilize it. Peg had to sag after climbing the first hill which hit 14% grade. We found out later she went to get a cab to go into town and the manager of the YO took her himself and came to pick her up after she got her orthopedic tape, a visit to the western ware shop, a new Kerrville jersey, and lunch at a restaurant that wasn't the YO restaurant.

Toward the end of the ride Charisse's bike started making a squealing noise, only happened at high speeds, sounded like brakes. The brakes seemed fine when stopped, we never figured it out. Anne rubbed it down with an alcohol swab, always a good idea, to help Charisse on her ride back from the YO to Schreiner to get her car.

After clean up and a nap, we got to Thai Ocha and got set up on the balcony overlooking the river. Niles, Mary and a new friend, Katy, joined us. The food was great, including Anne's salmon salad, and Stewart's Pad Kee Mow with chicken and his staple of fresh Thai chili peppers on the side. Sticky rice with mango and fried ice cream topped it off.

Then back to the YO where we chatted over a few glasses of wine and Dave went in to dance with the big black guy wiith the raucus band, entertaining from a distance.

The route choice was made by the placement of Dave's Place. On the 66 mile route, Dave's was at the halfway point which would mean 30 miles to ride after a long stop and several beers. So we opted for the 35 which left only 8 miles after Dave's, but turned into 42 miles counting the rides to/from the hotel.

Unfortunately, the ride organizers put the first rest stop 19 miles into the ride, or 22.5 from the hotel. CoonDog peeled off to pee which made all the women start thinking they had to go and by the time they got to the rest stop they were bursting at the seams. It reduced their fluid intake too so once nature was taken care of, it was time to refill bottles... but they were out of water! So we wandered around Camp Verde, nicely remodeled and expanded, and took pictures of the Camel (NOT camel toe!) until the water reinforcements showed up.

Just 8 miles on, we arrived at Dave's, chatted with Dave himself a bit, ordered our burgers and fries, collected some beers for the deck and checked out the bunnies, macaws, peacocks and many ducks and buzzards. Dave looked a bit weathered but was very friendly with everyone who came in, having a beer at one of the picnic tables. The place had gotten some paint and looked pretty good. It was more overcast than Friday so the unshaded deck was fine for lunch and overlooked the Guadalupe, which got Todd to singing and doing Forrest Gump impressions (a Forrest Gump marathon was playing on TV so all of us had watched at least some of it that weekend), A group of gay women in cycling jerseys were helping to photo bomb us while CoonDog returned the favor. Anne's Oregon Ducks jersey drew attention: one guy at Camp Verde couldn't see the "D" and thought it said Oregon Sucks, and one of the many ducks at Dave's climbed the hill to join us on the deck for his own photo op. It was a gorgeous day on the river and kids were rope swinging the water while canoes and kayaks made their way up it. We found out Katy worked at REI but had been in telecom for decades and was scoping out her next phase. She was fun and would be good to run into again. When the sun took over we went back to the many windowed pool table room with a jukebox and wrapped up our traditional Dave's stop.

Then back on the bikes for a pretty brisk ride with a tail wind back to the hotel. We got reservations at Rails, a converted train depot now restaurant. We had to go at 6pm or 7:30 and opted for early since the Joubert shuttle to get the Iowans to the airport had to wake up at 3:40 am. The restaurant was very cool and the patio dining was perfect, with a very professional but really friendly server, a large tiled fireplace and great food. Anne's pecan crusted sole with horseradish sauce, wild rice pilaf and asparagus and Stewart's pork tenderloin with mashed potatoes and zuchini were both delicious and perfect portion sizes to save room for the apple tart and espresso gelato.

One last chance to hang after dinner so we gathered on the YO's patio porch for a rousing game of Farkle / 10,000. Peg picked it up really quickly, and Dave buried himself in the iPad, while Kim farkled nearly every hand, opting to roll one die while holding 2200 points! She swears she doesn't do this with real money.

We found out the next day on our ride home that the Joubert Shuttle had seen 61 deer on the ride to the airport in the middle of the night!

One more awesome Hill Country ride in the books !