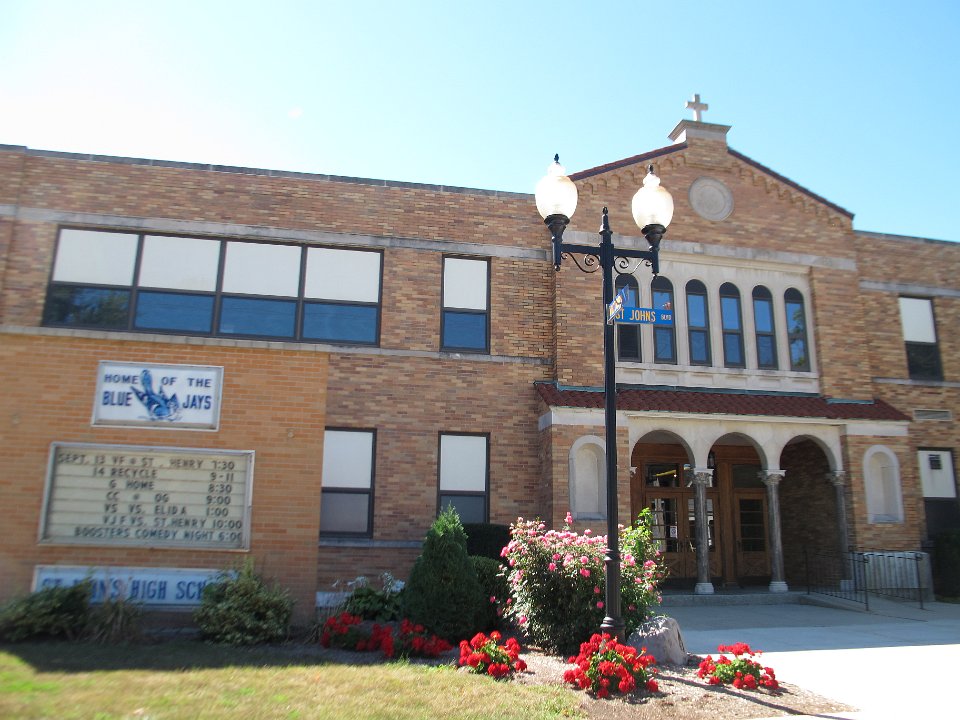 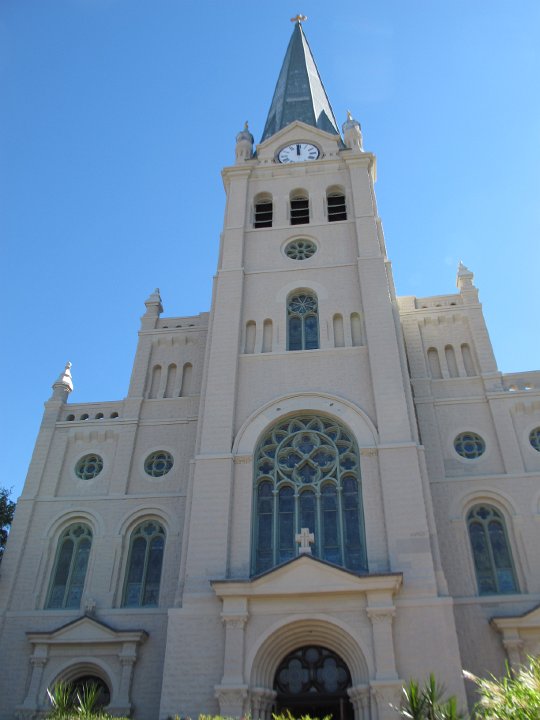 Well, guess what? It hasn't changed a bit! It's running about 7,000 people now and actually looks pretty spruced up, in a new coat of paint sort of way.

Cathy (Hayes) Szalkowski who lives near Toledo and picked me up at the Detroit airport about 2:30pm. Cathy was at the wrong terminal and I was upstairs and needed to be downstairs but somehow we connected. She looked great! And it was 64 degrees (still 95 in Dallas). So comfortable.

We drove to the Fairfield Inn in Lima since the Microtel in Delphos was booked full with the reunion and two weddings. We gabbed all the way, catching up on Randy and Anna (Cathy's husband and daughter) and Stewart. Since they don't feed people on planes any more, I was starving and talked Cathy into finding a Starbucks. We stopped in Bowling Green, across the street from the university where Anna was attending classes. Just after we left, she called Cathy to say she had just gotten out of class. We barely missed her!

The Ohio countryside hasn't changed... miles of open green fields, some trees changing color already. We got to the Fairfield about 5:30, then headed over to Elaine (Arnzen) Sheehan's [her dad was the basketball coach] old stomping grounds to meet up with Elaine and Jenni Jones-Miller. Elaine is just as personable as ever and Jenni is such a hoot. These two really have not changed!

Then on to downtown Delphos to scope out some dinner. Main Street looks like the epitome of small town anywhere with those old buildings and cozy storefronts. We chose Bentily's Sports Bar and were pleasantly surprised by how pretty it was inside, heavy wood and stamped metal ceiling, and a very long bar down the whole right side of the narrow but deep restaurant. Caleb took our orders and put up with our teasing while he hunted for red and white wine somewhere in that giant bar. They had an awesome salad bar and the tilapia was really tasty along with "broasted" potatoes which were sort of lightly fried large slices of potato, actually yummy. We had a lot of fun catching up on and made sure to pick up a copy of the Tri County News before we left.

After dinner, we stood out in the middle of the street for quite a while, taking photos with the street ilghts on, no traffic at all. Then we walked around the corner to the Rustic, the old high school hangout, another skinny but very deep storefront bar on 2nd Street. There we met up with many old friends: Elaine (Ditto) McBeth, reunion organizer extraordinaire, Marty Bertling, Joan (Metzger) Albert, Lori (Van Pelt) Kramer. So good to see them!

I went to the bar to get a glass of wine and I got interrogated by Beeze Grothouse who wanted me to remember who he was and when that failed, he stood up. So I said, "Oh! You're a Grothouse!" Then he said "Which one, Grit or Beeze?" Jeez, I shoulda studied for this. I found out he'd been coaching the girl's basketball team for like 25 years pretty successfully so that was fun. Then he asked if I knew the woman next to him. She looked really familiar and I found out it was Lou Ann Elwer, and she now owns the Rustic! Wow!

Everybody was squeezed up around the bar for a long time but finally we migrated to a table in the back near the pool table so we could talk. That was pretty much out of the question though since the music was so freakin' loud. But some stories stuck. Elaine McBeth asked "Guess who I saw last week?" Ummmm, no. "Come on, it's someone you dated in high school." Ok, Bob Garber? "No, but I see him all the time too." Um, Dave Armstrong? "No! Guess again". But that's all the people I dated in high school. "It was Willard Gay!!" Okay.... that doesn't ring a bell, and with a name like that you'd think it would. "Oh, you remember him. You dated for a few months. Anyway he's married now to a woman named Gaylene! Gaylene Gay!" Well, that was worth the story.

Meanwhile, Jenni caught up with Deb Gideon who was a good friend in high school and she had planned to stay overnight with her, but found out she lived an hour away. Not good driving so far this late after some wine, so she stayed with me at the Fairfield Inn.

The Fairfield has a nice hot breakfast buffet so we ate there Saturday morning. Jenni headed back to the room first while I grabbed another cup of coffee. We noticed a woman at the next table wearing Green Bay Packer pants (Jenni's favorite team) and showing people her ring. Cathy and I went to get a closer look and met Rosemary Hinkfuss, the first woman on the Packer's Board of Directors and still on it after 30+ years. She showed us her Super Bowl ring! We tried calling Jenni but she was already in the shower so I took pics with my phone and we caught Jenni up later. She cried out: "OH MY GOD!" in that way that Jenni has. Priceless.

After leaving the Fairfield, we toured Delphos, driving by the high school and elementary school, saw the nunnery and the priest house, and then by the church. It is so amazing. But there was a wedding going on so we didn't go inside... yet. On to the stomping grounds, first Jenni's, then mine (509 W 3rd St) and finally to Cathy's. They all looked so well kept up. The last time I'd seen mine was 20 years ago and the porch railings had been removed and the ceiling was caving in. Although the railings are still gone, it looks nice, repaired and painted and the landscaping was well done. We got photos of ourselves near our old houses, then went on. We drove over the Miami-Erie Canal, which unfortunately was mildly green and stagnant on one side of the street and a complete fungus filled swamp on the other. Oh, the memories. On to downtown past the Canal Museum, the hardware store and for some reason Hitler guarding silver and gold in one storefront. Out to Stadium Park where pee wee football was underway. The swimming pool now has huge waterslides so I couldn't see if they still had the 3 diving boards and the cement "raft" in the middle of the pool that kept us entertained when we were kids.

Then it was time for lunch at the Eagles, a men's club that someone's husband had gotten us entrance to. It had a huge bar in the middle of the room with a few guys huddled around it. We pushed some tables together and ordered our sandwiches and jalepeno bottle caps (deep fried jalepeno slices that I can't believe I've never seen in Texas... they were delicious!). Then the serious gabbing was on, catching up with all these great friends:

We passed around school yearbooks and photo albums, got the scoop on divorces and children and who would or wouldn't be attending. We quizzed each other on high school trivia, like who were the four speakers at our graduation. That turned out to be a lucky conversation later.

We stayed for hours and could have stayed all day, but several folks were attending Mass at 4:30 and had to get ready so we headed to the parking lot. On the way out, we saw a t-shirt for sale with the slogan "Rock Paper Scissors *Gun* I Win!!" Really? Outside, we found that Lori Kramer brought us show and tell: a cardboard sign that had been taped to her car with bandaids when she was dating Lee Krendl. It had all kinds of crude innuendos on it about the "honeymoon" that night. She claimed I had something to do with it which escapes me but is entirely possible since I was dating a scofflaw at the time. Since we were on the topic of high school dates, I told her the WIllard Gay story and she said "You didn't date Willard Gay! I did!!" Whew, luckily I didn't run into him and give him a big old hug!

We parted ways and Cathy, Jenni, Joan and I resumed the tour, trying to get into the church again. What? Another wedding! So on to the grocery to pick up some food since the reunion wasn't serving anything but requested that we bring some finger food.

Then back to the Fairfield to dress for the reunion. Since none of us were going to Mass we took our time but headed back just as it was wrapping up, so Joan and I went on into the church so I could get some pictures. People were milling around getting communion so I got several photos without disrupting anything. It's such a beautiful church with its high arched ceilings, heavy wood altar rails, many tall stained glass windows and the station of the cross carvings, and looks to have been really well kept up.

Then on to dinner at Kosta's. We met up at Elaine Sheehan's house beforehand to rendezvous with Randy (Cathy's husband) and Pat (Elaine's husband) who had driven down from Toledo that afternoon. Joan and Elaine's mom, Alice, caught up reminiscing about the days when Alice and two friends would go to Joan's mother's house to get their hair done at the in-home beauty shop every Friday. They apparently were quite the cut-ups.

Kosta's was great, with lots of dining room space and the obligatory big bar. We settled in and got some good food and great conversation. The Greek chicken fell off the bone. I sat next to Marty and shared my cancer experience with her, thankfully now 12 years in the past. She had been through some really major facial surgeries due to a melanoma that showed up on the roof of her mouth during a dental appointment. Very rare, and can be held at bay by some methods but they are dangerous to continue after certain time spans elapse, at which point it would start sending out tendrils again. She has a prosthesis now for the roof of her mouth, some teeth and jawline and sinuses. But she looks absolutely amazing and has a very upbeat attitude about the whole thing. You do what you gotta do, right?

The reunion itself was at the VFW and included a Q&A session where numbers were called and the two people who had those numbers competed to answer a question first (eg: "Who was the janitor?" A: "Ollie Seaver"). Elaine Sheehan cheated since she was asked who spoke at our graduation and we had just talked about that at lunch, naming all four people and Elaine was one of them (the others were Joan Metzger, Linda Eggeman and Veronica Luersman).

We all posed for a class photo then had an auction with funds going to the school. It included a subscription to the Delphos Herald and (I kid you not) Delphos wine! Red and white, pretty much as descriptive as it got. Meanwhile we all chatted long into the night, and had a really great time. I will definitely not wait 20 years to see these folks again. In fact, some are in favor of a destination vacation so I'm really looking forward to that.