by Stewart and Anne French 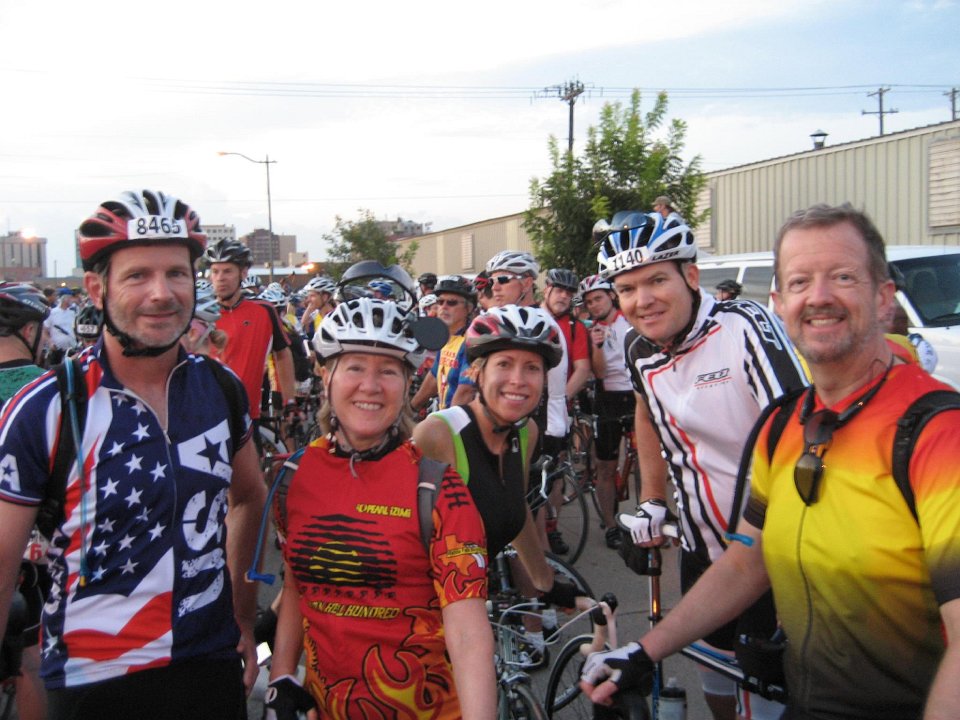 This year, we decided to stay at the Comfort Inn, on the northwest corner of 287 and I-44 in Wichita Falls, TX. It' a bit farther to bike to the start line but not too bad, and not through any traffic to speak of. We had reserved two rooms and talked with Todd and Kim about taking one of the rooms. They decided to take us up on it, and Team French-Joubert was formed!

We drove up on Friday afternoon, an easy drive up 287 from Decatur through Bowie, TX to Wichita Falls. Todd and Kim drove up Friday from Austin and met us at the hotel, checked in, and we loaded up in Kim's car and headed over to the MPEC to register and shop. Vendors from all over north Texas come to Wichita Falls and setup in the Multi Purpose Events Center. It's a zoo of bicycle parts, clothes, people, music, and oddly, not much food or drink.

Our dinner reservations were at McBride Land & Cattle Company. Stewart had called Blannie on our drive up to see if he was biking HHH this year and, Yes, he was biking it and coming in a bit later than us. After dinner we walked over and watched some of the criterium race. The race track was setup on blocked off city streets. We watched those crazy racers flying around the corners for a while, then headed back over the MPEC for a seminar by Bikin Mike Keel. Bikin Mike runs a training shop in Plano, TX, bikinmike.com, near Plano Cycle and Fitness (used to be Plano Schwinn back in the day).

Bikin Mike had a good crowd for his seminar. Here are some of his comments and suggestions:

Next morning we got up early, still dark, prepped, and biked over to the starting line, with the other 12,000 bikers. We met Blannie there. He picked up his bike over his head and waded through the humanity to get to us. And when the gun fired that was the last time we saw him! He started like a rocket and kept it up. I think he finished an hour ahead of us.

We had waited to decide on whether to do 100 miles until this morning, standing there in the starting line crowd. Anne and Kim were "all in" but Todd and Stewart were not. The winning argument was: "Well, what else are we going to do for the rest of the day??!" That won us over.

The 70 mile rest area was very stylish with palm trees, sno cones, a Margaritaville theme, then south from there into the strong headwind along the highway. Our speed had been about 17 mph during the first 70 miles, then slowed down dramatically in the headwind. Todd took point, slowed way down for us as we tucked in, and ran a paceline all the way back. It was very difficult, as Bikin Mike put it: It Went Dark.

At one point we saw sparklies at a factory in the distance off to our right. This was a glass factory (PPG's float factory, where Todd&Kim's glass comes from!), Todd had a front-tire flat right there in front of the factory. Todd refilled using a CO2 canister as we watched. Anne has a couple of those her sister gave her but never used them. She watched Todd closely to see how it was done.

The last rest stop at Sheppard AFB was fantastic. The Airmen were waiting for us and Valet Parked our bikes. They had a double line of cheering airmen as we rolled out toward Wichita Falls.

We stopped and saw C-130, F-16, A-10. There were airmen there to talk with us about the aircraft. Just 10 more miles to the end. None of us remember much about those 10 miles. We do remember walking around the grounds at the end and finding an old, very cool sno-cone maker, single cylinder engine, old, popped loud as it fired, a John Deere. We ordered sno-cones of course. Agh! Brain Freeze!

During the last 30 miles we saw lots of people give up, sit down by the side of the road and wait for SAG. HHH organizers had some fancy sags, custom trailers to haul bikes and riders back to the start.