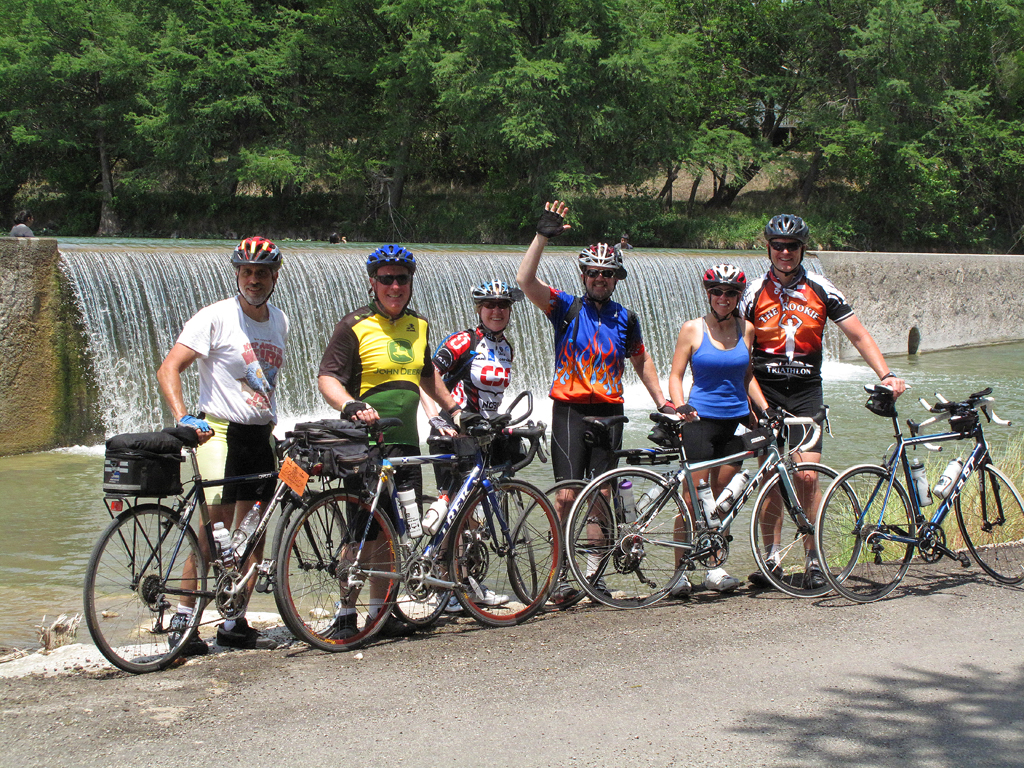 We left home in Allen about 10:30am, on a leisurely pace getting everything packed and ready. No hurry today since packet pickup at Schreiner University goes until 9pm or so. It's a 5.5 hour drive down. Google maps gave us a new route this year. South on 75, over and south on 35E, then bear off to the soutwest on Highway 67, bumping into 281 in Hico TX then straight south into Lampasas, Burnet, Marble Falls, Right in Johnson City, left in Fredricksburg, straight south into Kerrville. It took us almost exactly 5.5 hours.

Wildflower note: There were lots of wildflowers in North Texas, around Allen, but very few as we headed south on 281. We must have missed the prime season this year with easter being later in April.

We checked in at the Hampton in Kerrville then headed over to Schreiner University for Packet Pickup. This year the EHCT was hosted by the Austin Cycling Club. There were lots of people milling about, everybody having a good time. The T-shirts were special this year, made of an all-synthetic material, slick, "sporty", with a vibrant colorful graphic.

Austin Cycling Club had setup a "Social" there at the university, for the first time. They had $3.00 wine! Now that there is a good deal. We met Dave "Coondog" Coonie, Todd and Kim Joubert. Dave's from Iowa and drove down for this 3-day tour. He's done this tour several times in the past. Todd and Kim are from Austin. This was their first EHCT! I think we've done this ride 12-13 times... we couldn't remember! EHCT is our favorite bicycle tour of all times. We traded lots of RAGBRAI (Des Moine Registers Annual Great Bike Ride Across Iowa) stories. Dave has been on it 12 times.

This was our first time staying in Kerrville, at the Hampton Inn. We decided to stay here instead of in Fredericksburg because there was no bicycling route in Fredericksburg. Some years they have a Friday or Saturday route do the "Willow City Loop" heading out from Fredericksburg High School and looping north and east from Fredericksburg. This year all the routes were from Kerrville. Also, we thought it would be nice to wander around Kerrville for a change and see what this town has to offer in restaurants and entertainment

We ate dinner at the "River's Edge" restaurant, a nice little place on the Guadalupe River on the east side of Kerrville. River's Edge was three stories right on the river, top story was an open bar patio area, first and second story were indoor and outdoor dinner seating. Great food. Next year we'll make reservations so we can sit in the prime seats (even so our seats were very nice with a great view of the river). Found out later that Morgan and Mary Jane had eaten there and remembered it.

Met Todd, Kim, Dave at 8am at Shreiner University. Dave parked right next to us, accidentally. We prepped our bikes then rolled around the parking lots yelling "Todd, Kim !!" until they answered up. Dave said "I've a plan for us, Start Slow, and get Slower." We saw on the map we were going to climb Freedom Trail hill again this year. Anne carefully measured it at a 16% sustained grade. Ouch! My heart rate hit a record 180. The ride was very damn windy and hilly. The milage on the directions were messed up almost right from the start. The directions said the Freedom Trail hill was at about mile 5 but it really was at about mile 9-10. The directions stayed messed up all the way through. But it was consistently screwed up, so we easily dealt with it. Coming back into town, heading south, was at least a 30 mph wind, maybe gusting to 40. I noticed "wind tunnel lips" flopping while flying down a hill, south into the winds. There was road construction about 5 miles from the finish. TxDOT had reduced traffic to 1-way through a section where they were putting down a new road surface (tar). They were leading cars through each way with a guide truck. Traffic was getting really, really bad when we arrived. Anne bribed the flag worked with a chocolate Cliff Bar so he was nice to us (he was nice to us anyway :-).

It was realy great riding with a group. We rode individually some, and we rode together a lot, always re-grouped at the rest stops, intersections, and kept each other entertained so the winds and hills never discouraged us (too much). The ride ended at mile 48.8 (was supposed to be a 43 mile route) back at Schreiner University. We said our goodbyes with a promise to meet back on Saturday at 8am just like today.

Anne and I went into Fredericksburg in the afternoon and walked Main St, stopping in at an ironworks shop, Valeska's. Some of this art will have to end up in our yard some day! We could hardly resist the Mariachi bands, Donkeys, Pigs that could Fly, Sunflowers! I was relaxed on a swing when I noticed a longhorn measuring me up.

There are a lot of choices for dinner in Fredericksburg, particularly if you like beer, pork, cabbage products, and beer! We ate at our favorite Navajo Grill. They have added an outdoor seating area, in an enclosed courtyard, very beautiful with flowering potted plants and a waterfall. We sat near a wedding party "John and Brenda", a bunch of bicyclers, some with scenic "butt-crack disease". Very good food and relaxing.

We met Todd and Kim again at 8am in the "Prius parking lot". Accidentally, they drove in and parked right beside of us! There were far more people there Saturday morning vs. Friday. I had a flat tire immediately while pumping up my rear tire (stem pulled out when disconnecting the presta pump. Argh!). This took a bit of time changing it out, so we didn't ride out of the parking lot until about 08:20am. We rode all around calling out "Coondog!" but never connected with Dave. We hoped we'd meet up with him at the first rest stop, which we did ! That worked out great.

We met another biker Niles Seldon who we rode with Saturday. Turned out Niles used to work at TI at Lewisville and Spring Creek exactly when Anne and I worked there! Paths never crossed. Niles is now living and working in Austin. It was great to ride and talk with him!

Saturday's route was our old familiar route up "Karen's Hill" and Eagles Nest, the switch-backs up to the first rest stop. After Freedom Trail none of the hills seemed quite so difficult. From the top there was a steep, complex downhill. They warned us about it and we all took it very carefully. Steep with switch-backs on the way down. From there we rode by river, very light rolling hills, into the south wind. We were really looking forward to the wind on Saturday. The ride took us into the wind the first half, with the promise of the wind to our back on the way back into Kerrville, and it was exactly that way.

It is nice to have the route divided up into short stretches of a few miles each, between route markers or road turns. It is a long tedious grind when the directions say "9.0 miles then LT at T on SR 173". We had several of these Saturday.

At about mile 38 we hit the Camp Verde rest stop. Anne and I both remembered this as a wonderful stop under shade trees, near the Camp Verde General Store. We could rest, take our shoes off, buy snacks and drinks, before continuing on. This year the Rest Stop was within sight of the general store, but not near enough to be able to use it, and not under those wonderful shade trees. sigh. They probably didn't want us "Biker Types" in the store. Oh well, maybe next year we'll be back under the trees!

We clearly remember, in years past, the next section of the route being puncuated with a water crossing. The past organizers announced it as "...there is a water crossing near River Road. You will need to stop, get off your bikes, take off your shoes and socks, walk across, then continue...". Ha! This year the water is not over the road, but it was still memorable.

Dave knew of a place "Dave's Place Beer & Ice" that was about at the 45 mile point, along River Road at Centerpoint. We pulled in, lined our bikes up under the antlers and beer posters, beside all the other bikes (Harley's that is...), and headed in for beers and a welcome rest stop. Dave treated us to a bucket of Bud Lights. We sat around and talked getting more relaxed the more we sat and the more beer we drank. Somewhere along the way we remembered that we had 10 more miles to go so we packed up and headed back out on the road. The wind was to our back most of the way in, with a few unwelcome, steep hills to climb.

Anne seemed to be fueled by the beer. She picked up speed and blew on into town dragging Dave and I as we tucked in behind her. Back at Shreiner University we all said our goodbyes and headed to our cars. Anne and I drove back to the Hampton and had the most wonderful nap, some combination of 6 hours of biking, the sun and wind, and a few beers can make a peson pretty relaxed.

Dinner that night was at the "Cowboy Steakhouse", an old-fashioned country steak house that had been in Kerrville for many years. After that we decided to drive around the Guadalupe river in downtown and see what we could see. To our surprise Kerrville has a fantastic park system wrapped around the river, both on the north and south side, with walking bridges across, waterfalls, overlooking covered gazebos where one can sit and relax. Here's a map, front side and back side that shows the Kerrville area. We found the place where they were having a "chili cook off", mostly over for the night but still had a lot of people milling about enjoying themselves.

At one point we found ourselves driving back up Riverhills Blvd, about 2 miles from the start in the Saturday route. This neighborhood consisted of beautiful homes, some of which overlooked the Guadalupe with stunning views. Anne noticed some deer at one point so I eased off the Prius gas pedal and went "stealth" running totally quiet on electricity. That's when we saw 20 deer leisurely wandering through the lawns of these houses. They watched us, kept their distance, but seemed pretty used to people around. We never saw so many wild deer in one place!

Click here to watch the bicycle flyby Movie ! (kinda big, so wait for it...)

We got up early Sunday morning, packed up, and drove back home to Allen. It was an easy drive after having our time-sense adjusted by hours and hours on a bicycle. It felt like a 20 minute drive!