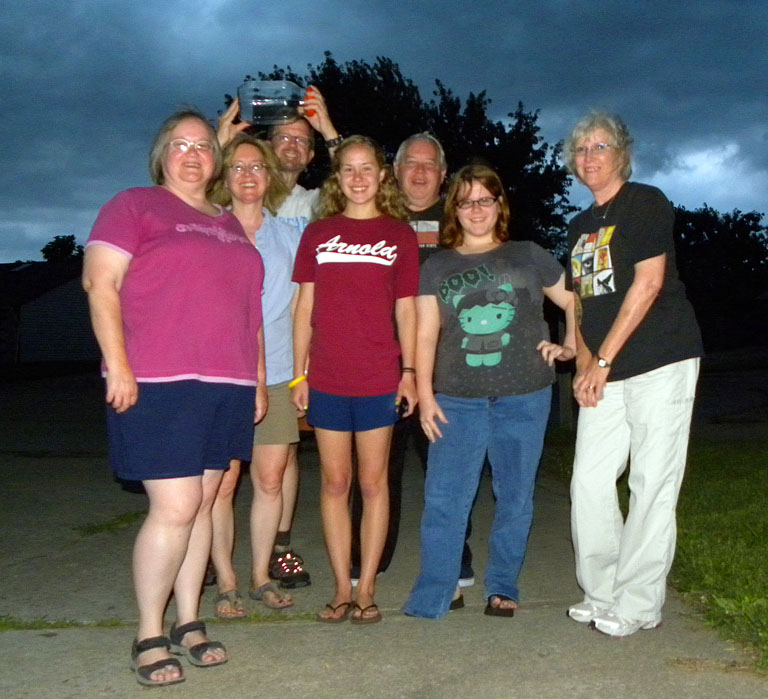 Anne and I headed out to DFW International Airport early, took Park-Ride-Fly, checked our one bag (now $25 extra!), and went through security. I got a phone call from Emily on the bus ride, "We've landed and are at the Indianpolis gate!". Cool.

We met them there and said our Hello's. The flight to Indianapolis was about 1.5 easy hours. Anne and I played Scrabble and the time zoomed by.

We picked up our luggage and saw this amazing artwork near the baggage claim. The Indianapolis Internation airport was full of art, Another memorial piece of art was the walkway over the 8-lane highway from the terminal to the parking structure and car rental. It was very wide, with moving sidewalks on either side. On the ceiling were hundreds of round, flat lights, about 18" diameter. Without noticing, as we walked across the walkway, the lights would light up and change color, making patterns around the walking people, lights running up and down the walkway. It was _very_ cool.

We got our SUV, a Ford Explorer, and headed to Teresa's house, up 465. On our way there we stopped by a CVS to pick up some lotion and sunscreen. Trina, Anne, Emily, and Mia went inside while I waited outside. When they came back out I put the Ford into Reverse to back out, but I had put on the emergency brake, a foot operated brake like the one in my Prius. However, it did not release the same way. I looked and looked but could not figure out how it worked! So I opened the door and stepped out, took my glasses off and put them on the seat, and dug around down near the pedals. Found it! A small lever, electronic,I heard fssst! and the Ford started rolling backwards! ...uh oh... Anne, Trina, and the girls started yelling and I jumped back into the Ford and slammed on the brake to stop it. I didn't hit anybody or another car, but I mashed up my glasses sitting on them. sigh. What a dork.

We met Teresa and Gil at Penn Station for a late lunch. From there we headed over to Halliday Park where Teresa's photos are being displayed. What a wonderful place! We walked the displays looking at all of Teresa's photos that she took all around Indianapolis, mostly wildlife, birds, and insects, beautifully framed and displayed. Teresa told us that the frames were off-the-shelf, the photos edited and printed on her own photo printer at her house. Very, very cool.

We ended up quietly sitting in a viewing room watching the birds, woodpecker, finches, hummingbirds, insects, squirrels, and chipmunks as they climbed the feeders and ate their fill.

Trina, Anne, Emily, Mia, and I then headed over to the Hampton and got checked in, then back over to Teresa's home for dinner, conversation, and Scrabble. Teresa was wonderful, making dinner for us all three days. Thursday we had chili with Strawberry Tripe. Mmmmm... loved the tripe! After dinner we played Scrabble, played with the zither (harp?), watched a little TV, and had interesting conversations. I think it was this night Emily and Mia came up with IndianapaLooza.

Friday at the Zoo

Anne and I dropped everyone off at the front door and went and parked. We all sprayed ourselves down with sunscreen because the day was going to be hot and sunny.

We got our tickets, needed special tickets for the Dolphin show, got those too. We headed to the acquatics center, where we could pet the eels and sharks, then decided to wait on that because it was still cool, so we went outside to see ring-tailed lemurs, flamingoes, Cheetahs, elephants. We walked the grounds enjoying the terrific zoo, then ate lunch at one the central restuarants. We were sooo hot and sticky, the cold drinks and ice cream were wonderful. Here's a photo of us sitting in the shade relaxing. Look at the posers! The Dolphin show was okay, here's a couple photos of the girls petting the sharks. Can't believe they have hundreds of small sharks in a shallow pool that we can put our arms into!

We loaded the Explorer back up and headed back to Trese's house, then back to our rooms to clean up, a nap, then back to the house. This evening Trese made us Chicken Provence. The pasta was wonderful, we were very hungry :-) After dinner we setup for Scrabble, but a big storm was heading toward us from Chicago. It was very intense having caused tornados in Minnesota. We watched the storm on radar then when it looked like it was bearing down we headed outside to watch. That's when we discovered the fireflies! They were everywhere. The girls had never seen fireflies before. Trese found a large jar and we gathered fireflies while waiting for the storm to arrive. Don't want to get wet!

When the rain started we retreated to the porch, sitting and talking until the blowing rain forced us back in. Then it was scrabble and conversation until time to head back to the Hampton.

I think it is was tonight that we coined the term IndianaPoiLooza. Can't remember when the girls started saying things in a weird pidgen-French, but one thing led to another and every sentence that could ended up with some strange pidgen-French stuck in there!

Saturday at the Indianapolis Museum of Art

Stewart had two things on his list today, pickup a paperback of "To Kill a Mockingbird" and eat lunch at "Long John Silvers". We headed over to Trese's house, picked up Gil and Trese, and headed over to Half Price Books, where we ended up totally enthralled. Everyone went there own way. We eventually corralled everyone and drove over to the Indianapolis Museum of Art.

Trese loves walking the trails around the Indianapolis Museum of Art, IMA. They have rebuilt the trails and have 100 acres of woodlands, wetlands, meadows, a 35-acre lake, and miles of hike/bike paths around it all. We headed toward the paths but decided that it was a bit too hot, humid, and muddy to hike any distance, so instead we headed inside to look at the art. On the way we stopped at the amazing fountain and relaxed a bit enjoying the water and the beautiful surroundings. Here are some photos of us (okay, we took a lot of photos!) around the fountain.
Photo 1
Photo 2
Photo 3
Photo 4
Photo 5
Photo 6
Photo 7
Photo 8

The IMA is a wonderful museum with 3 floors of art above the ground floor. We wandered among the art - African, Asian, Textiles, Contomporary, Photographic, meeting back at the restaurant every hour to compare notes and make plans. They have a great restaurant with lots of healthy choices, coffees, deserts, and a nice quiet place to sit inside or outside and enjoy the fountain and talk. After several trips around the museum, hours actually, we ended up outside by the fountain again taking it easy.

This evening we again ended up at Trese's house for an evening of dinner and Scrabble. Tonight Trese fixed us up some fajitas. Her meals were fantastic every night and we really enjoyed ourselves. We got a surprise tonight as Dizzy and Peanut came out to play a little more.

We were up early Sunday to catch our flights back to Dallas and Houston. Here we say Goodbye to Trese and Indianapolis. We sure had a great time!