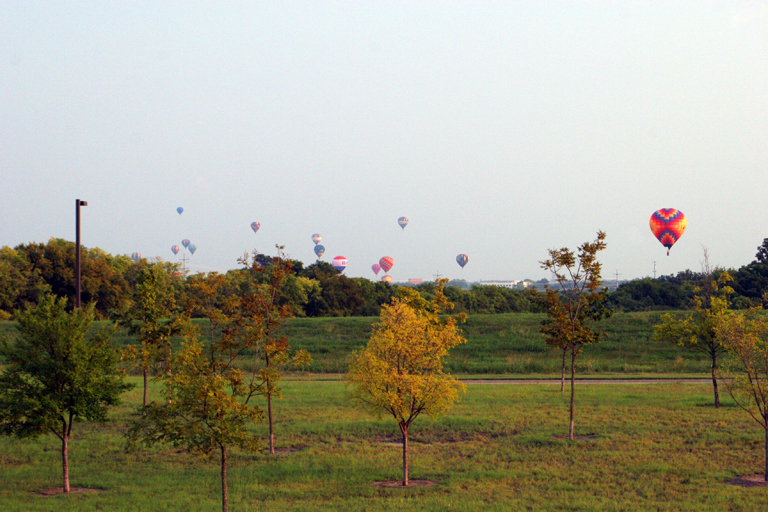 This morning Anne and I walked over from our house to the high spot near the Darling Homes models, about 300 yards from our house. From that vantage point, looking out over Bethany Drive, about the highest point in the neighborhood, we can see for miles to the east, south, and west. We watched the 4th of July fireworks from there and saw _12_ different fireworks displays! This morning we saw the balloons rising through a misty sky. The wind was very slight blowing out of the north. We saw the balloons rise then slowly drift away. It was pretty. We headed home.

This evening we decided to try it again. We walked over about 6pm, when the official guide, distributed in the Dallas Morning News on Friday, said that the balloon launch was supposed to occur. We waited around for a while and didn't see anything, so we decided to walk back along Seeport and see if any of our neighbors were out. A few were and we talked, then headed back to the house. Just before going into the house we decided to step up on the hill beside Norton Elementary. From there we could see some balloons rising in the distance. We quickly headed back to the high point to see what we could.

The sky was very beautiful this evening with clouds blocking the sun. In the distance we could see the balloons slowly rising from the festival grounds. As we watched it sure looked like they were getting bigger, and slowly drifting north-northwest, almost directly toward us! As they approached the balloons were dipping down below the tree line, then back up and over. After several minutes it was clear that they were heading toward the Montgomery Farm grounds just north of Connemara Conservancy.

Anne and I decided to walk over and see if we could get close in and watch the show. Cars were starting to pile up near the landing sites and people were quickly walking over with their kids. Some of the balloons were landing right here while others were flying over heading to other landings further north and west of us. As the Remax balloon came down the people in the chase car came running in to take the balloon down, wrap it up, and put it back into their truck. Once the balloon was deflated they yelled to the kids "anybody want to help?!" and the kids came running. With balloons flying overhead and the sun setting the kids helped wrap the balloon up and pack it into the basket. They were having a great time and we really enjoyed watching the show.