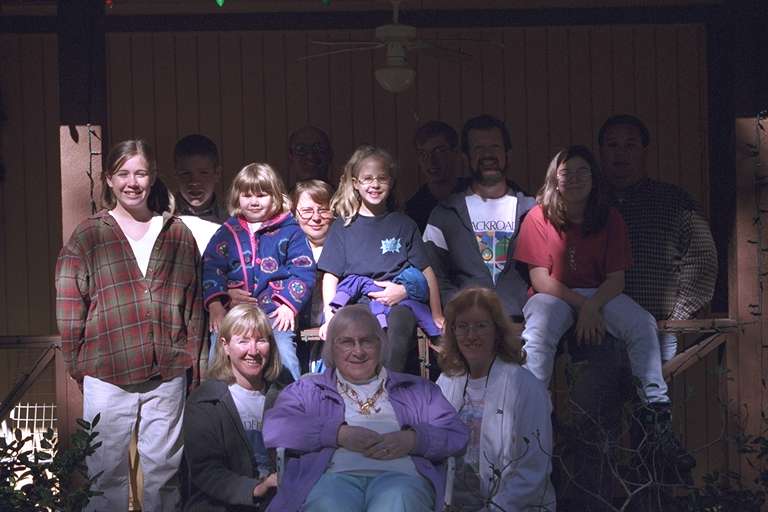 Trina and Steve invited us to visit with them in Houston this year. Anne's mom came with us this year.

This is Anne's mom, Esther's, first year in Plano, with Anne and her family moving Esther here in July. She has been slowly settling into her new surroundings at Day Spring. Her apartment is within a mile of our house, and 10 miles of Glenn's house. So it is very convenient for us, and for Esther.

We headed out driving early on Thanksgiving day. We'd rented a Patricia Cornwell novel, Black Notice, to listen to during the trip. But this book has a serious problem with potty mouth and we turned it off after about 30 minutes of listening. Bummer. Luckily we had other things to listen to. The weather was fine, clear and cool, and traffic wasn't so bad.

As usual Anne had setup reservations at the Raddison in Houston near Trina and Steve's. We arrived there first and checked in. They had only one person working the desk. Most of the entire place was empty, apparently very few guests stay with them over Thanksgiving. We got rooms near each, one for Esther, one for Anne and I. We got suites this time! Never had that before. They were very nice with separate living rooms and bedrooms. Oooh ahhh

After settling in we drove on over to Trina and Steves. They had cleaned and cleaned their house. They setup three separate dining areas, one in their old computer room pwhich they had completely reworked, moving the desks and electronics into the exercise room, one in the great room, and another in the kitchen, for the kids (hey! How did Emily get in all of these pictures!?). Let's see, eating there this Thanksgiving were: Trina and Steve, Steve's folks, Rita and Joe, Steve's sister Joni and her son Josh, Tom and Joyce and their kids Emily and Amelia, Trina and Steve's kids Doug, Russel, Melanie, and Brandi, Esther, Anne and me. Let's see, 17 people. Wow! What a crowd! Doug was back from college for the weekend and was having a great time with his family.

Minako had sent down 20 lbs (plus or minus a few!) of various types of bread. We packed them into a large cooler and brought them out Thanksgiving day. We heated it up and everyone enjoyed it.

We all kept very busy. I brought 2 disposable cameras and gave them to the kids telling them to "take one picture and pass it on". They did and we got some unusual pictures (to say the least!). We worked jigsaw puzzles with Mia taking a liking to Esther and helping out with the puzzles. Brandi got out her saxophone and serenaded us. She is getting very good!

Next day we arrived early to help with the christmas lights. Anne and Trina decided they needed a little exercise so Trina got out her aerobics tape, loaned Anne some clothes, and they went at it. Doug and Russel were assigned "roof duty", while Brandi, Anne, and I were sorting light strands, Trina was outside on the porch untangling. Then everyone helped putting lights out around the porch and in the bushes.