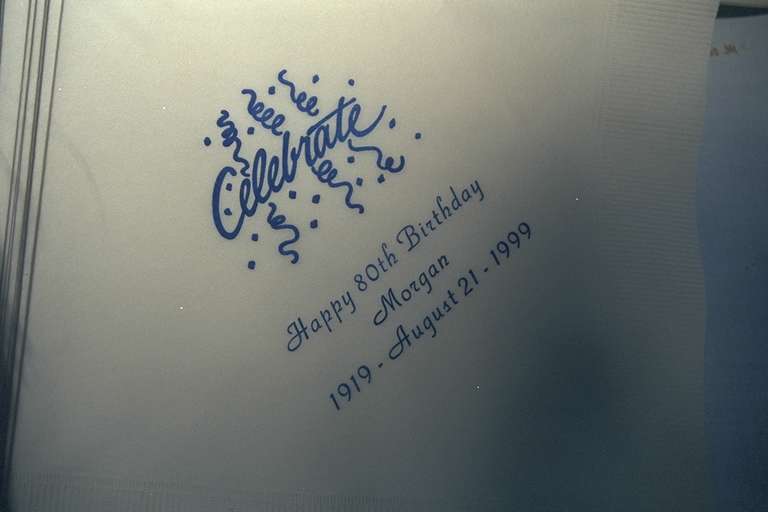 Anne and I drove in on Friday evening. Maxine, my mom, had carefully kept it secret that we were coming and that there were two big surprise parties planned, one on Saturday, one on Sunday. Maxine's relatives came on Saturday then Morgan's relatives came on Sunday. Dad didn't know Anne and I were driving in on Friday. We started early in order to arrive around 6pm, suppertime. When we got near their house, say about 2 minutes out, I called Dad from the car. He and I talked while we drove in and parked. He had no idea that we were standing on their front porch, walking in the front door, until he turned and looked and saw us standing there, the phone to my ear, his phone to his ear! I never saw such a look of suprise on his face! We couldn't hardly help but goof it up that evening as we schemed and talked about plans for Saturday and Sunday. We drew family trees, talked about when things should happen, discussed food preparation, any number of things that would tip him off. He carefully avoided saying anything, but I think he knew _exactly_ what was happening! Although it was August in Kentucky, we had fabulous, warm and breezy weather all the days we were visiting. This made the outside festivities so enjoyable. Here's a short desciption of what happened each day, along with some pictures to go with it.

We had to wait until the first person arrived to get started. No need letting Dad know what was happening! At the same time we really didn't want him to get started on any project he might have wanted to start if this was a "normal" day! He didn't try. He knew, didn't he?

Joe and Franklin came first, then Roxie and Joyce, then everyone else.

We setup tables and chairs outside on the concrete at back of their house. The trees are tall enough to make very nice shade and as the sun moved across the sky we chased the shade around on the deck.

All day we sat around and talked and visited. We set the bar-b-q up and, when it was time, we cranked it up and cooked up some hamburgers. Franklin cooked up some grilled onions and peppers. While this was going on everyone else brought out their food, it was pot-luck, and setup things on the tables. We ate and ate. It was quite a feast.

My brother, Morgan T., had planned to bring his family in late on Friday night and stay through the weekend, sending them home on Sunday and staying himself through the week until the next Saturday. But their flight was delayed due to a hurricane along the gulf. Morgan had to reschedule and only arrived mid-day on Saturday through a round-about route that took him 6 hours to get here! Mary Jane and the kids couldn't come at all. This was very unfortunate. We all wanted them to make it.

Finally, we had a birthday celebration with singing, cake, presents, and a speech. It was wonderful. People started packing up and leaving late in the afternoon.

Sunday: Well, Dad pretty well had figured out what was going on, so he was eager to get started! Ed and Shaun (Ed's son) and Jenny (Dad's sister) arrived about 10am.

Hubert Ballard and Jennifer (Jackie's daughter) and their son Jacob (a real cutie at 2 weeks old) left early and didn't get in the picture.

Like Saturday, we visited and talked out back. I believe it was a little warmer today. We chased the shade more on Sunday than Saturday. Morgan and I setup the grill and started cooking, while Lynn helped to direct us to the shade. In time, everyone gathered their food and drink together and put it out for the feasting to begin. Everyone ate and ate, talked and talked. Then everyone gathered together for gift giving, singing, and Dad's 80th birthday cake. His second of the weekend!

Here's some of Morgan's family pictures.

Dad talked with everyone, ate and ate, enjoyed his cake and presents, and had a wonderful time. We were all so happy to be with him to celebrate his 80th!