Welcome to Anne and Stewart's 2006 Year in Review! This year's highlights included our new kittens, multiple trips to KY, and a very busy July! 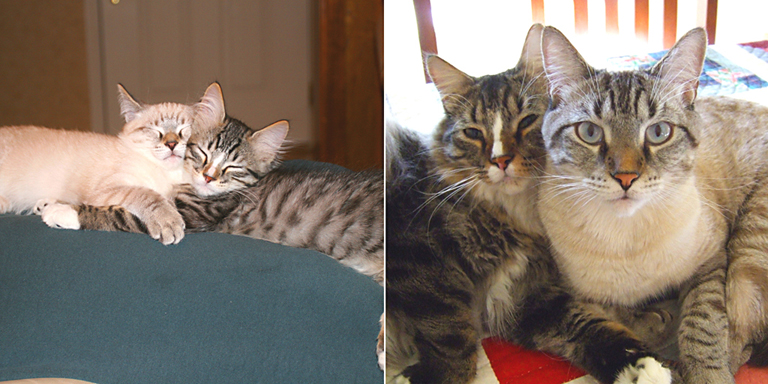 Doug, Manasi, Melanie, Haley, Brandi, Richard, Julie, Nancy, and Paul came by over the New Year holidays and we watched a movie in our "Blue Collar Entertainment Room" (the garage). Everyone wrapped up in colorful quilts and drank hot chocolate, while the kittens tried to get our attention.

In January Anne took her brother Glenn up on his offer to take her flying. They saw the sights of North Texas from Addison to Lake Texoma north of Sherman, TX. There were some signs of the draught underway, that resulted in stage 3 water rationing throughout 2006.

Stewart made his first trip to Kentucky in February to help his parents with chores and some Dr. appointments.

Anne made multiple trips this year to Univ. of Texas at Dallas to represent Texas Instruments at the university. She enjoyed presenting TI technology to the students and interviewing them as prospective new employees for TI.

In April we biked in the "Tour Dallas" bike rally from downtown Dallas out and around White Rock Lake and back. Then later in the month we traveled to Kerrville and Fredericksburg, TX for the "Easter Hill Country" bike rally. We added to our 70 mile ride by getting lost in the construction at the end of the route.

Stewart and his brother Morgan T. made another trip to Kentucky in late April to assist his parents attending the funeral of Blan Moore. Stewart's father Morgan and Blan Moore were prisoner's of war in Japan during WWII.

In May we rode in the "Wild Ride" bike rally in Richardson, TX, getting lost again at the very end of the ride. Later in the month we drove to Houston to watch Brandi graduate high school. Hurray for Brandi! Stewart loaned Melanie the digital camera and she took 8 billion digital photos.

In June we rode in the "Mesquite Rodeo Ride" and "Collin Classic" bike rallies. Finally we didn't get lost.

Later in June, Anne's sister Teresa organized a family vacation in the Grand Canyon. Anne joined Teresa, Trina, Steve, Gil, Glenn, Emily, and Mia there for a hiking and sight seeing adventure. Emily told Anne her favorite story of the trip was Teresa picking up a rock and throwing it into the Grand Canyon... and missing! Trina wondered if she needed a bigger target. 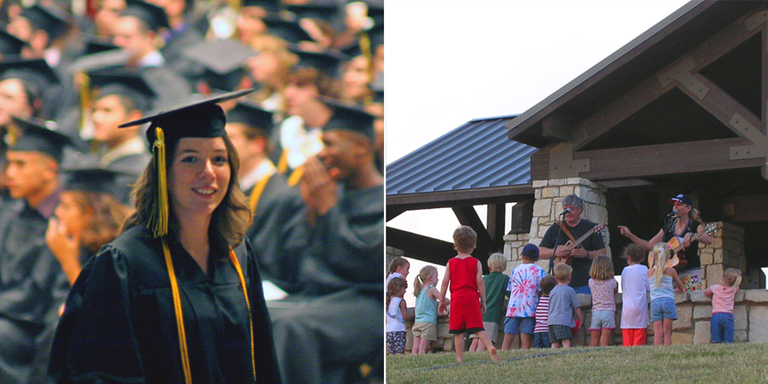 Our 4th of July fireworks show turned into a rainy, stormy event without any real fireworks, but with gale force wind, pelting rains, and emergency vehicles rescuing the kids from the collapsing bounce houses. Samantha summed it up real well (as the rain pelted us and the wind blew at 40 mph) - "This is the worst day of my life!"

We spent most of July glued to our TV watching the Tour de France. It was especially interesting since Lance is now retired and the Tour organizers kicked out almost all the big contenders for doping.

We held our annual family Pool Party in mid July with over 40 people attending! It was great fun swimming, bar-b-queing, and talking it up with everyone, then later showing a movie on the wall in the back yard. Stewart hoped he could float in the pool and watch the movie, but it was just too cold for that!

The day after the pool party Anne's nephew Tom and his girlfriend Lucia came into town after having visited San Antonio for a wedding. Tom and Lucia live in Eugene, Oregon where they go to school. Tom is a bicycle messenger so we took them to White Rock Lake and biked both ways around the Lake. We then retired to the house for a really cool Google Earth fly-by of Eugene, learning where Tom and Lucia do their biking, and watching the later stages of the Tour de France. 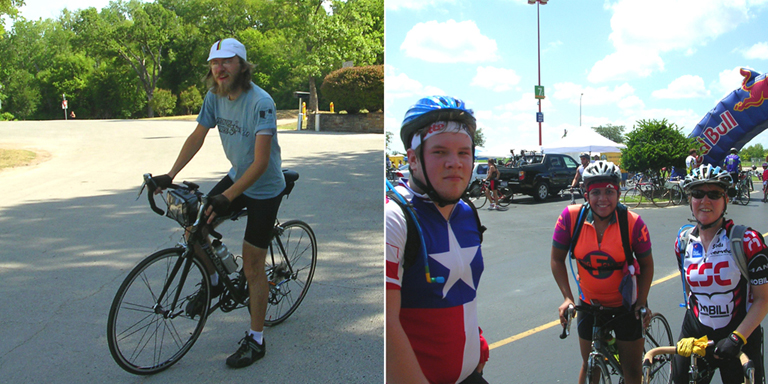 July was very busy. The very next weekend we drove to Houston and met Anne's nephew Russell and his girlfriend Glenda to bike in the Katy Flatland Century bike rally. Russell and Glenda did very well given that Glenda had never biked in a rally before, and neither had trained very much. Russell keeps asking when the next ride is!

In August we drove to Kentucky for the French and Milby family reunions held at Stewart's parents house. The French's were Saturday, the Milby's Sunday. We cleared out Morgan and Maxine's metal building and set up the tables of food in there, while the people set up lawn chairs all over the back yard, visited, and talked it up. It was great catching up with Meredith and Cliff, up from Baton Rouge, where Mere attends, and Cliff recently graduated from LSU. 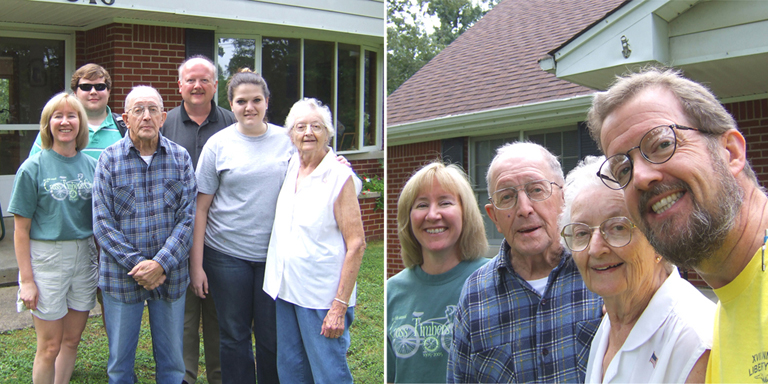 In September we attended a shindig at our friends Jeanie and Chris's house where a lot of our long-time friends, that we don't see very often any more, came for dinner and conversation.

Trina, Steve, Brandi, Blake, Manasi and Doug (who drove Big Red), came up for an UNT Parent Weekend in September. Brandi and her friend Blake started as freshmen at the Univ. of North Texas in Denton this fall. We are looking forward to seeing them more, and visiting the campus for jazz concerts and bike rides.

The Dallas Arboretum was a favorite spot to visit this fall, for both the Fall Festival and the Tree House exhibit. We got married at the Dallas Arboretum Sunken Gardens (then called the DeGolyer Estates). Now it is covered with chrysanthemums and pumpkins, with kids in Halloween costumes climbing all over the tree house art surrounding large oaks, elms, and even bamboo. It has changed so much since 1982, and is incredibly beautiful to visit now, and for us to reminisce. 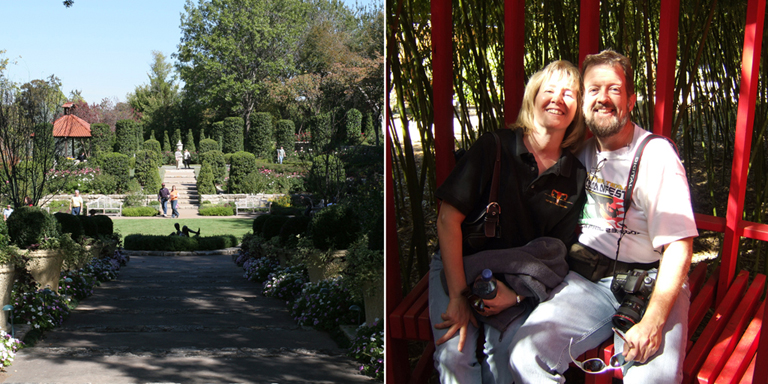 Stewart's Dad had an emergency in September. He fell and fractured his hip. He was in rehab for 3 weeks. Stewart's Mom stayed with his Dad, as his brother Morgan T. took "First Responder" duty and stayed with them. Then Stewart took over as Morgan was released from rehab and returned home. He did not require surgery and his recovery at home was miraculous. We moved his treadmill and exercised gear to the 1st floor and he is now getting back into his exercise program. We are so thankful.

Our friends Richard and Julie invited us over for Halloween. They decorate their house with everything from dancing skeletons to a giant inflatable pumpkin. We had a great time watching the kids Trick or Treat then run crying and screaming as the fake fog envelopes them and the skeleton dances and laughs maniacally.

For Thanksgiving we headed back to Kentucky. Stewart's folks had a laundry list of "To Do" items for us. We had some of the best weather we could have asked for and had a wonderful Thanksgiving dinner at their house, then we headed over to the beautiful Saunders Spring park in Radcliff for a long hike on Thanksgiving day. We drove instead of flying which turned out to be a very good choice, given the long lines and delays at the airports. While there we drove over to Krogers in Elizabethtown, and stopped in at Arnold's Coffee Cafe, where we always seem to run into Tyler Kelly. No more. Tyler has moved to Indianapolis, so who did we see there, Mike and Ann's daughter, Tyler’s sister Chelsea! The Kelly's and Arnold's, an Elizabethtown tradition.